The misunderstanding of science

Competition A couple of weeks ago we reported what an impression Sarah Hunter, Google's top lobbying person and Head of UK Public Policy, had made at a public event.

The internet is "like the Gaia Theory," she said, "A butterfly flaps its wings and a tsunami happens in another part of the world."

Somehow I can't imagine Larry or Sergey being impressed, but here at El Reg, we deeply treasure the public misunderstanding of science, and think there should be a Chair devoted to it, a sort of antimatter to the Professors in the Public Understanding of Science.

With Stephen Fry unavailable, we invited you to provide more Hunteresque explanations:

When asked to explain what she meant by Gaia Theory, Sarah Hunter replied with:

"Taking a quote out of context is like Occam's Razor, it will always land butter side down."

Thanks to Tim Cuthill for:

Newton's 3rd Law: Whenever Google does something very clever, like seamlessly migrating its massive GFS/MapReduce operations over to Colossus/BigTable[1], the reaction caused forces one of its people to do something incredibly stupid[2]. Thus the existence [citation needed] of this competition serves to prove Newton correct.

Can't find the priority option in Gmail, so I have attached something heavy (and apt, I feel) to give gravity a helping hand. 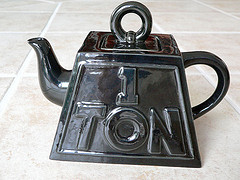 Occam's Razor says that the shortest answer is always the right one because lies get complicated and unnecessarily long so only short answers can be the truth the same way that you can only shave short stubble with a razor because long hairs clog it up.

Moore's Law is that every year computers get faster because as anything that can go wrong does go wrong the boffins can find and fix those bugs so that things get speeded up better.  And I think the bugs must be at least the size of little beetles or something because as they get removed, the chips in the computers keep getting smaller too. At least that's what my dad says.

John-Paul S also has a crack at a Hunteresque interpretation of Moore's Law:

Moore's law is a specific case of the Conservation of Momentum law. Once transistors began to shrink, the conservation of momentum dictates that the speed of shrinking must be conserved, and that this value having been set early on – and with no external forces acting upon it – has caused transistor density on a integrated circuit to double every two years.

– Sarah Hunter, as reported to Asiren

Michael Hanson is not deterred:

The Sarah Hunter Malapropism Uncertainty Principle: one cannot both make absurd statements and predict the idiocy of said statement; therefore simply stating a concept, in fact, alters the meaning to its most ridiculous form.

Nor is Steve Duvall:

This states that, the further away from its source light gets, the more it looks like the inside of a square box that has been turned inside out. Ie. dark. Like.

Which is very Hunteresque. Michael Gorman tells us:

The Poynting vector is the cross-product of the angry finger of blame.

The theory of plate tectonics has been falsified. Earthquakes (and hence tsunamis) are caused by Lepidoptera (presumably, very large ones).

3rd Law of New Towns:  Every roundabout has an equal and opposite roundabout.

Jonathan Gladstone and Daire Stockdale completely get it with their respective entries:

It's like the Quantum Theory. Something's going straight and it just keeps going without slowing down unless something else makes it change speed or direction. The direction of travel is not as sensible as it ought to be.

It's like the 'Schrödinger's Cat Theory'. Organisms, when exposed to 'Black Box' radiation, can produce offspring with genetic mutations that might confer a selective advantage.

The Second Law of Information Dynamics.

John Fitzpatrick reinterprets Einstein for us:

Relativity: The theory that animals are related to each other because they had the same grandchildren in dinosaur times.

As does David Emmett:

General Relativity: the theory put forward by Albert Einstein that are only six people between you and anyone else on the planet.

And the brilliant Alby offers:

Osmosis: The process by which all personal information moves across the membrane of the web browser until it is eventually owned by Google.

Finally, a big thanks to Nicholas Merlinski for scanning this magnificent conflation of misunderstandings, which once appeared in the Southern Chartered Accountants Student Society. 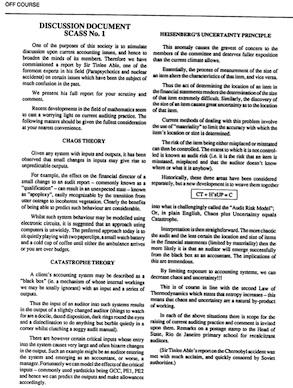 You have to click to enlarge it. But it's worth it.

The judges have gone into a huddle, then fallen asleep in a pool of absinthe, so I'll leave it open to Commenters to rig the result decide a favourite. ®