Research in Motion's BlackBerry PlayBook has received a much-needed shot in the arm by becoming the first tablet to earn US government security certification.

"RIM is pleased to announce that the BlackBerry PlayBook is the first tablet approved under FIPS for use within the US federal government," said BlackBerry Security headman Scott Totzke in a prepared statement. 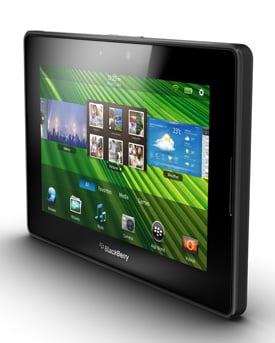 Saved by the feds?

FIPS is the government's Federal Information Processing Standard certification, which is handed out by the National Institute of Standards and Technology (NIST) as required by 2002's Federal Information Security Management Act (FISMA), passed shortly after and to a great degree in response to the 9/11 attacks.

"This certification," Totzke continued, "demonstrates our continued commitment to meeting the needs of security-conscious organizations and enables the US federal government to buy with confidence knowing that the PlayBook meets their computing policy requirements for protecting sensitive information."

The certification also provides RIM with a bit of sorely needed good news. The PlayBook hasn't exactly been setting the tablet world on fire. When it first launched, for example, the inability for RIM to support one account on two devices made it impossible for the PlayBook to have its own native email client – a BlackBerry Bridge kludge was needed to get email from the same account's BlackBerry handset.

A series of updates are ameliorating this and other shortcomings, but research by Strategy Analytics shows that RIM's tablet still has a long way to go: SA pegged the PlayBook's market share at a measly 3.3 per cent.

Perhaps RIM's new government security certification will help it boost that figure. It also has one other thing going for it in the realm of sales to the feds: Barack Obama is famously a big BlackBerry fan – so much so that RIM designed a super-secure model just for him.

It never hurts to have friends in high places. ®

This article was updated to correct an error about the PlayBook's lack of a native email client.