Microsoft has released a third preview of SQL Server 2011, codenamed "Denali" and including the "Juneau" toolset.

In the Denali database engine there are new features that supporting high availability, and improve query performance of data warehousing queries. Then there's FileTable, a special table type that is also published as a Windows network share, and which enables file system access to data managed by SQL Server.

Interestingly, Project Crescent is built with Silverlight rather than HTML5, despite Microsoft's new-found commitment to all things HTML.

Alongside these new database features Microsoft is introducing a new set of tools delivered as add-ins to Visual Studio, and which work with older versions of SQL Server as well as Denali. This SQL Server Development Tools (SSDT) collection, codenamed "Juneau", is an ambitious project that builds on what was done for the existing Visual Studio 2008 and 2010 database projects – although, curiously, some features currently found in database projects are missing in Juneau.

The database being a key part of most business applications, the goal of Juneau is to integrate database development with application development, and to bring capabilities like testing, debugging, version control, refactoring, dependency checking, and deployment to the database. In addition, the query and design tools should mean that developers rarely need to switch to SQL Server Management Studio. 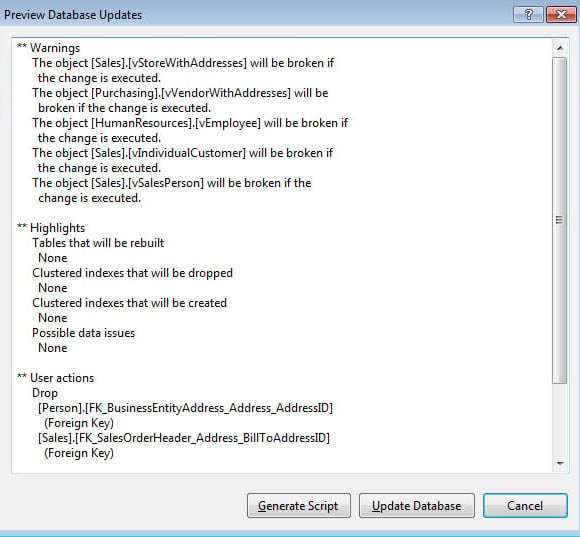 Juneau previews database changes and warns of the consequences

Juneau provides a new SQL Server project type in Visual Studio for database design and debugging. A SQL Server database project stores the entire database schema as the Transact-SQL (T-SQL) scripts that are required to create it, including code that runs in the database, such as stored procedures and triggers. You can import the schema from an existing database, or you can build it from scratch.

Since it's code, the schema is amenable to code-oriented operations such as versioning and refactoring, and it enables features such as Go to Definition.

Juneau uses a new testing and debugging method that works with a local, single-user database that's created automatically for each database project. When you debug the project, the database schema is applied to this local instance.

There are some limitations to this method, such as no support for full-text indexes. You can, however, debug SQL CLR, which is custom .NET code running in the database – SQL Server 2011 uses .NET Framework 4.0.

Unlike the old Visual Studio database projects, Juneau has a visual table designer. That said, some actions are not really visual and simply generate a template line of T-SQL for you to edit. The T-SQL editor, however, stays automatically in sync with the visual designer and includes smart code completion based on the underlying schema. Apparently this uses the actual parser from the SQL Server database engine under the covers.

A key part of the SSDT collection is a tool called Schema Compare. This takes the schema in your project, compares it to a target database, and reports any differences. For example, if a database admin has made some changes since the schema was imported to the project, Schema Compare will highlight them. The tools are also able to generate update scripts that apply the project schema to the target, and warn you of consequences such as data loss.

The SSDT Juneau tools always use a two-stage process to amend an existing database. Rather than apply the changes immediately, it previews the update, warns you about what will break, and offers the choice of a generated script or immediate update. This buffered approach is a strong feature, and will help to prevent mistakes.

Another notable feature is deployment. The Publish Database tool lets you specify a target which can be an on-premise SQL Server or SQL Azure, hosted on Microsoft's cloud.

Be forewarned: not all the features of Juneau are in the current preview. One missing piece – so far, at least – is the application project and database project integration, which will link SQL Server projects to the Entity Framework for object-relational mapping.

While Juneau's general approach looks strong, it is puzzling that some of the best parts of the old database projects – such as the Schema Dependency Viewer and Data Compare tool – are not in the preview version. As one one developer on Microsoft's discussion forum put it, "It feels like 1 step forward, 2 steps backwards."

As of today, Juneau's visual design tools are weak, there's no visual query designer, and no database diagramming or visual modelling tool. Some of these gaps may be filled by the time the tools are released – or, failing that, in a future update. If so, the new SSDT could be an excellent set of tools – although of course you're tied to SQL Server.

Although the Juneau tools currently install into Visual Studio 2010, Microsoft says they will be part of the next version of Visual Studio. They can also be used standalone, though they still use the Visual Studio shell. Expect more detail on this at the Build conference in September.

You can find more information about Juneau and download the preview here. ®