The European Space Agency's Herschel Space Observatory has discovered just where the water in Saturn's upper atmosphere comes from: a giant aqueous doughnut surrounding the planet, formed by H2O hosing from the moon Enceladus. 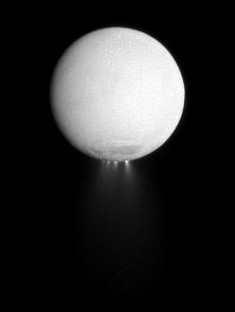 NASA's Cassini spacecraft previously spied the water plumes of Enceladus (see pic*), but until now scientists hadn't made the connection between these and Saturnian atmospheric water, first spotted in 1997 by the ESA's Infrared Space Observatory.

In fact, Enceladus's outpourings – estimated at 250kg per second – feed a massive torus which measures "more than 10 times the radius of Saturn", but is just one Saturn-radius thick. ESA explains: "Enceladus orbits the planet at a distance of about four Saturn radii, replenishing the torus with its jets of water."

The doughnut previously went undetected because its water vapour is transparent to visible light, but not to the infrared wavelengths Herschel can sniff.

The percentage of Enceladus's water output eventually falling on Saturn is small, perhaps 3 to 5 per cent. The rest "is lost into space, freezes on the rings or perhaps falls onto Saturn’s other moons", the ESA notes.

That which does enter the atmosphere will eventually fall and condense into miniscule clouds.

Paul Hartogh, the scientist from the Max-Planck-Institut für Sonnensystemforschung, who led the team analysing the Herschel results, said: "There is no analogy to this behaviour on Earth. No significant quantities of water enter our atmosphere from space. This is unique to Saturn."

The ESA has more on the soggy Saturnian doughnut here, and more on Herschel here. ®

*NASA explains: "At least four distinct plumes of water ice spew out from the south polar region of Saturn's moon Enceladus. Light reflected off Saturn is illuminating the moon while the Sun, almost directly behind Enceladus, is backlighting the plumes. This view looks toward the Saturn-facing side of Enceladus (504 kilometers across). North is up.

"The image was taken in visible light with the Cassini spacecraft narrow-angle camera on Dec. 25, 2009. The view was obtained at a distance of approximately 617,000 kilometers from Enceladus and at a Sun-Enceladus-spacecraft, or phase, angle of 174 degrees. Image scale is 4 kilometers per pixel."

Have your BitLocker key handy when updating, but maybe not on a Post-it stuck to the screen, OK?
OSes15 Aug 2022 | 10

Opinion Of all the non-carbon energy options we have, this is the only one which can keep the lights on
Science15 Aug 2022 | 179