Stories of weird iPad shipping routes have been cropping up a while on the web and there's usually a perfectly logical explanation for why our precious tech takes so many diversions en route to our homes. This one regarding a MacBook Air is really strange, though.

One bewildered Reg reader sent us shots of his tracking information, which shows his recently-ordered MBA taking part in a world tour before it heads off to Blighty. Here's a screengrab of his UPS tracking details. 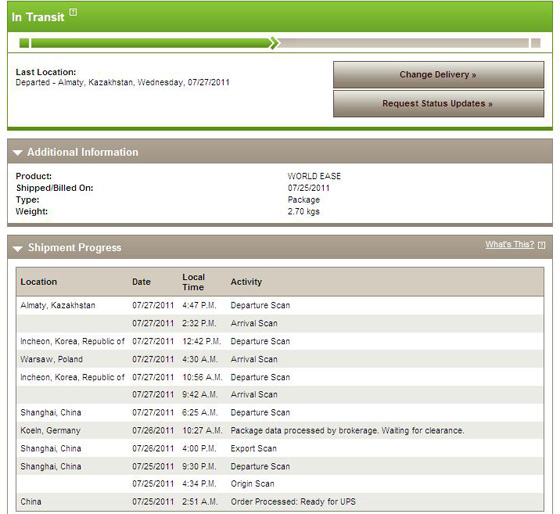 As expected, the computer starts off in China. Then when data has been processed - in Germany? - the clearance is accepted and the hardware shipped off to Incheon, Korea. Forty minutes or so later, it departs again, this time to Poland.

While that seems logically closer to home, the MacBook doesn't appear to leave Poland. Instead it presumably teleports itself back to Korea and departs again, heading off to Almaty, Kazakhstan.

Air by name, air-bound by nature.

The MBP didn't stay there long, though, taking-off a few hours ago, but where it will end up next is anyone's guess. We'll update the story if it lands in another strange location, but hope - for the sake of our dear reader - his Macbook Air is heading off to its final destination now. ®

Thanks to reader Stuart for the tip