MS-DOS is 30 years old today. Well, kind of. On 27 July 1981, Microsoft gave the name MS-DOS to the disk operating system it acquired on that day from Seattle Computer Products (SCP), a hardware company owned and run by a fellow called Rod Brock.

SCP developed what it at various times called QDOS and 86-DOS to run on a CPU card it had built based on Intel's 8086 processor. 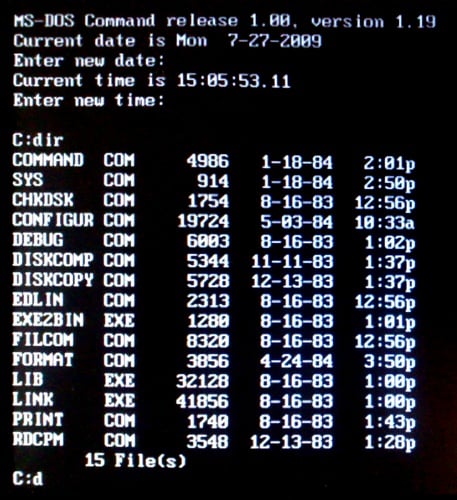 Command line: MS-DOS 1.19 still running after all these years

The company had planned to use Digital Research's CP/M-86 operating system, then still in development. But, having released the card in November 1979 - it shipped with an 8086-compatible version Microsoft's Basic language interpreter-cum-operating system - and reached April 1980 without CP/M-86 becoming available to bundle, SCP decided it had to create its own OS for the card.

Enter, in August 1980, QDOS. It really did stand for Quick and Dirty Operating System. That's actually what it was: a basic but serviceable OS good for coding and running programs written in 8086 assembly language - the x86 instruction set. It was written by SCP's Tim Paterson, who had joined the company as a programmer a couple of years previously and began work on it in April 1980. 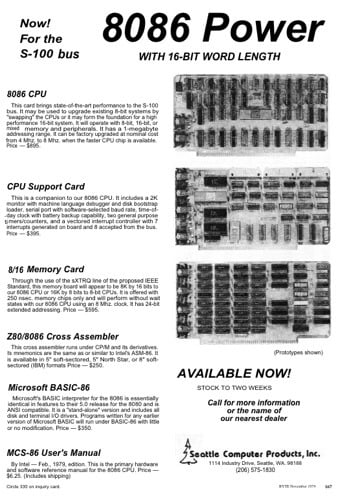 On the cards: Seattle Computer Products advertises its wares

Some observers later claimed that QDOS too closely resembled CP/M for comfort. Paterson himself would later say that QDOS' design criteria specifically included the abililty to support programs written for CP/M and compiled for the 8086. That's not at all surprising given that SCP undoubtedly saw QDOS as a temporary stand in until Digital Research (DR) shipped CP/M-86.

The picture we have today is muddied by the claims that IBM originally wanted to use CP/M-86 in its first personal computer. IBM and DR famously failed to come to terms that would allow CP/M-86 to be bundled with the PC, and IBM turned to Microsoft for an alternative. Digital Research founder Gary Kildall, who died in 1994, would later allege that Microsoft's product was a rip off, fuelling plagiarism claims that Paterson has always denied - he reverse engineered it. 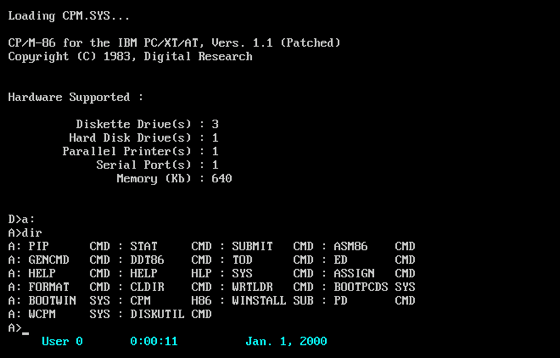 Update My fellow Reg hack Andrew Orlowski points out that, no matter what Paterson says, the US court ruled against the programmer in a defamation lawsuit he brought against publisher Little Brown for claiming the origins of QDOS were not clear-cut.

Back in 1980, Paterson continued to evolve QDOS through the year, the OS being renamed 86-DOS - it was now evidently no longer viewed as a rough-and-ready stand-in - between September and December 1980. Accounts differ as to when the name - and the OS' status - was switched, but December is the date Paterson himself gave during a Softtalk interview published just a few years later.

Next page: 'Hi, it's Microsoft. Say, can we license your OS?'
Page: