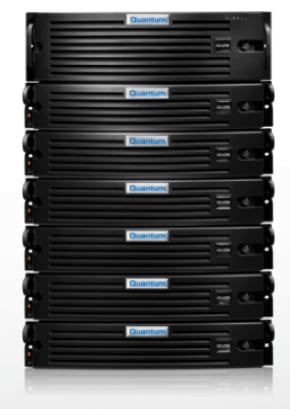 Latterly Quantum has been emphasising its deduplication speed with its DXi v2.0 software.

OST or Open Storage Technology is a Symantec API for NetBackup and BackupExec to interface to storage hardware devices.

That was last month; now we have the 6701 and 6702 which go even faster, probably due to a processor upgrade. The 6702 handles 5.8TB/hour (1.61GB/sec) in virtual tape library (VTL) mode and with OST, and 5TB/hour (1.389GB/sec) in NAS mode. Quantum says this is twice the performance of its leading competitor, which means Data Domain.

Boost is software that runs on a NetBackup or Backup Exec media server which pre-processes backup data and strips out some duplicated segments before sending it to the target Data Domain box.

A Quantum briefing deck says this of the 6702 performance: "No gimmicks – real performance. [It's] target-based performance, works with any backup software, no extras needed" – or, who needs Boost?

It looks as if Quantum is positioning the 6702 against Data Domain's 630, although it goes faster than the un-Boosted 670.

The 6700 scales from 8 to 80TB of usable RAID 6 capacity, as does the now upgraded 6500. Data contents can be replicated to another DXi appliance for disaster recovery purposes.

The media server segments backup data stream blocks, generates signatures for each segment and checks these against an index on the target DXi system. Segments with an index match are discarded. Unique segments are compressed and sent over the wire. Without Accent, this work is done by the target DXi appliance.

Quantum has not provided any performance data for DXi Accent, although it stands to reason that any DXi target system will dedupe faster when combined with DXi Accent on a source media server. DXi Accent supports NetBackup media servers using the OST API. Quantum said it intends to extend support to other applications in the future.

DXi Accent is enabled on a media server by server basis. Quantum says it is the only such software which supports a direct path to tape, meaning that Data Domain Boost does not.