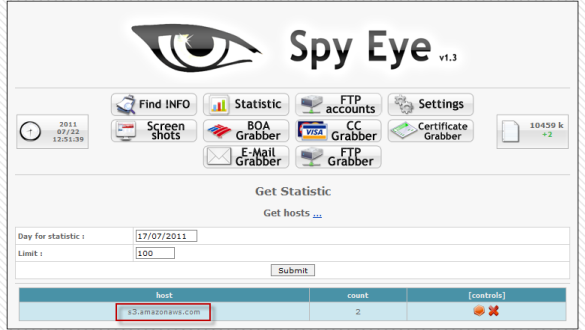 It's not the first time Amazon cloud services have been tapped by botnet operators. In late 2009, researchers found the ZeuS trojan using Amazon's EC2 to help issue commands and updates to infected machines. The code base of ZeuS was later found to have merged with that of SpyEye.

Kaspersky's discovery came a few days after researchers from Trusteer reported that the developers of SpyEye have infused their code with sophisticated new capabilities that allow the malware to evade transaction monitoring services that banks use to detect fraud. Trusteer said they are at times seeing two new versions of the malware being released per week, a pace that represents a significant uptick over previous development schedules.

“SpyEye developers appear to have figured how these defenses operate and are now constantly trying to ensure their code activity flies under the radar of these detection systems,” Trusteer CEO Mickey Boodaei wrote recently. “SpyEye seems to follow Agile software development practices, namely it is flexibly and simply coded, and new configurations are being rolled out as quickly as possible by its developers.”

SpyEye has also increased its geographic presence and the number of financial institutions it targets. Institutions in the US, UK, Canada, Germany and Australia are most heavily targeted. ®