Initial thoughts on our audacious ballocket

We at the Special Projects Bureau have been mulling just how our Low Orbit Helium Assisted Navigator (LOHAN) project is going to work and, having looked at your suggestions and ideas, have put together our initial thoughts.

To recap, we're going to launch a rocket-powered Vulture 2 spaceplane from under a helium balloon and ask it to guide itself back to terra firma using an onboard autopilot system.

This is commonly known as a "rockoon" concept, or "ballocket" as we call it in the SPB fab bunker, and presents a few serious technical challenges - not least how to launch the aircraft.

So, let's kick off by mulling that particular poser. Back in the 1980s, reader John Guest was involved in a rockoon project aiming to put a 1 gram payload into orbit, which came to nothing as a result of the estimated $50K cost.

He and his chums evidently put some thought into the matter, because he writes: "Launch before balloon burst. Much better platform stability. Once burst occurs, you don't know what your craft attitude is going to be.

"You won't make orbit (and I don't think you want to, really) however a launch attitude of 45 degrees would both maximize downrange distance and altitude."

That sounds about right to us. Some previous rockoons have launched vertically, sacrificing the balloon, but we believe that's a no-no in this case due to the potential damage to the aircraft.

Meteorological balloons get really, really big at altitude, so you need a spaceplane launch angle which will avoid the enormous latex sphere while offering the vehicle the chance to get maximum altitude.

Several readers had the idea of using multiple balloons, but this multiplies the diameter problem and doesn't really offer an advantage in terms of maximum attainable altitude. All of the balloons are going to burst at around the same height anyway, and it's likely the first explosion will trigger multiple bangs.

Here's our intitial spec, based on the Paper Aircraft Released Into Space (PARIS) concept of having the aircraft attached to a main payload box:

In summary, the main payload electonics will enable the Vulture 2 onboard cameras and autopilot and then fire the rocket motor at a predetermined altitude. The aircraft will fly at an angle of 45° from some form of launch platform, the design of which should run in tandem with the Vulture 2 development.

Onwards with the Vulture 2 ... Here's our list of requirements for the vehicle:

Despite a lot of you demanding we concoct something explosive out of potassium nitrate and sugar, stick it in a metal tube and use it to blast the Vulture 2 into the blue yonder, we believe an off-the-shelf solid fuel motor is the way to go.

Similarly, there are a few highly convincing off-the-shelf autopilots available, used for UAVs and the like. Using these will cut down development time and enable us to concentrate on the Vulture 2 design.

Speaking of which, we're very much obliged to Murray Pearson for this concept. Click on the image for a bigger version, or get the pdf here: 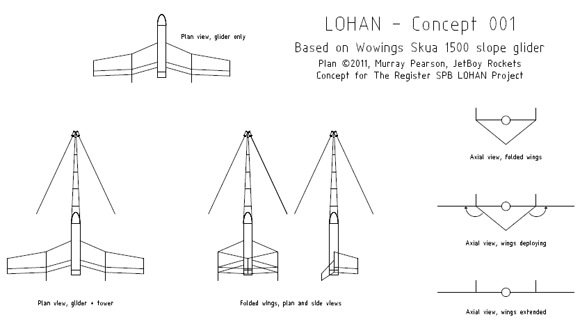 The basic idea is a tractor rocket configuration, for its inherent stability. Normal aero-stabilized rockets use a launch rod or rail system to hold the craft in place as it accelerates to speeds at which the fins will be effective stabilizers.

There is another problem with this approach on balloons: at the incredibly high altitudes attainable by a balloon, the air is of course extremely rarified and you will need BIG fins and LOTS of speed for aerostabilizing to work using a conventional tail-engined layout (implying a long and heavy launchrail).

The LOHAN 001 concept avoids these issues entirely by placing the engines at the nose in a tractor configuration; this will fly and accelerate stably even in a total vacuum, provided the engine ignitions are approximately simultaneous. The conical arrangement of engines places the centre of thrust at the apex of the cone far ahead of the CG of the craft so it simply pulls the craft with great stability.

Interesting. We're not entirely convinced by the folding wing design, but there's food for thought there.

Before we wrap this first look at the practicalities of LOHAN and get back to the shed, we'd like to address a couple of issues many of you raised.

First up, temperature at altitude. Yup, it gets pretty cold up there, but on PARIS we successfully used styrofoam rigid insulation to keep the electronics snug and a very expensive low-temperature grease to make sure the moving parts did just that.

Secondly, we're not going to use hydrogen for the balloon, and that's final. We're going to invoke the "Hindenburg objection" for the last time on this lighter-than-air matter.

Thanks to all of you who've chipped in with ideas for LOHAN, and we welcome your thoughts on all of the above, as we begin to firm up the Vulture 2 design and move forward with the main payload. ®