It's gone away somewhere, that's for sure

Climate models have predicted more warming than the instruments have measured – leading to various explanations. One paper claims the heat is real, but it's deep in the oceans, and there's no mystery. NASA's James Hansen – in a private paper released earlier this year – disagrees. Hansen says (PDF/1.5MB) the heat isn't in the oceans at all, but simply hasn't manifested itself in the form of global warming, because of man-made and natural aerosols. The models "mix heat too efficiently into the deep ocean and as a result underestimate the negative forcing by human-made aerosols," says the Yoda of Catastrophic Man-made Global Warming.

Earlier this month, a team led by an economist pronounced that aerosol emissions from Chinese coal stations were "consistent with" Yoda's theory.

Spencer's work, published (pdf) in the journal Remote Sensing, concludes that more energy is radiated back to space than previously thought, and it is released earlier, too. Spencer looked at warming events (he used Hadley's temperature record and the CERES energy sensor data from NASA's Terra satellites) and compared the empirical evidence against six climate models.

The paper, On the Misdiagnosis of Surface Temperature Feedbacks from Variations in Earth's Radiant Energy Balance, by Spencer and William Braswell, essentially says the climate is too chaotic to say with certainty what is going on. According to the paper: "[A]tmospheric feedback diagnosis of the climate system remains an unsolved problem, due primarily to the inability to distinguish between radiative forcing and radiative feedback in satellite radiative budget observations.

"The satellite observations suggest there is much more energy lost to space during and after warming than the climate models show," says the sceptical scientist (he calls himself a "climate optimist").

"There is a huge discrepancy between the data and the forecasts that is especially big over the oceans.” 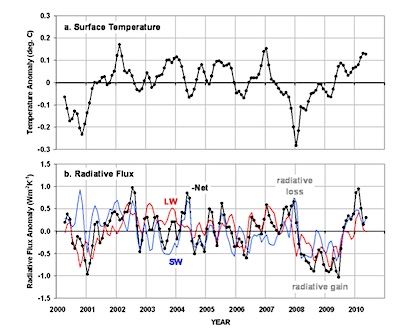 Times series of monthly global average anomalies in (a) surface temperatures from HadCRUT3, and (b) radiative fluxes from Terra CERES SSF Edition 2.5, for the period March 2000 through June 2010. All time series have a 1-2-1 smoother applied to reduce sampling noise. 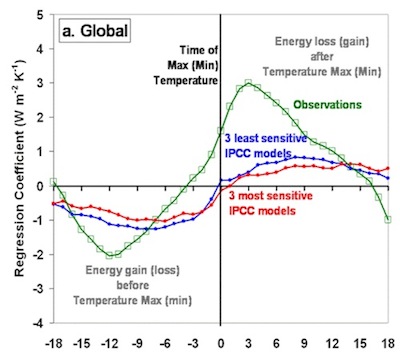 Warmists poured scorn on the veteran sceptic. "Climate sensitivity is not constrained by the last two decades of imperfect satellite data, but rather the paleoclimate record," Gavin Schmidt told Live Science. ®