Here come the ex-Sunners at CumuLogic

All things must PaaS

A startup called CumuLogic, founded by a number of Java and cloud experts at the former Sun Microsystems, is fluffing up yet another platform as a service (PaaS) cloud, joining the ranks of VMware with Cloud Foundry, Red Hat with OpenShift, Microsoft with Azure, and others.

CumuLogic was founded relatively recently, in January 2011, and very quickly ramped up a platform cloud to support Java applications, which went into limited beta running atop Amazon's EC2 infrastructure cloud earlier this year. But CumuLogic, which was founded by former Sunners Rajesh Ramchandani and Laura Ventura, has aspirations that go beyond turning EC2 into a platform cloud. The company wants to turn all of the popular public clouds as well as internal private clouds into a configurable platform cloud that lets companies mix and match database, middleware, and runtimes as their applications require.

At first pass, such openness would seem to run counter to the idea of a platform cloud, which tends to limit choices to simplify management and integration on behalf of the company supplying the platform on which applications will run and consume database and Web services. But CumuLogic thinks that in the long run, companies will want more open platform clouds than are available, and not just because they fear vendor lock-in but because companies have a hodge-podge of database, middleware, and compilers they use to create and run applications and it is not easy for them to walk away from their investments and know-how.

Ramchandani and Ventura are well aware of this, of course. Ramchandani spent 15 years at Sun in various roles, working on Java tools and Sun's middleware stack and eventually moving into the Sun Cloud business unit – which was Sun's first stab at building an infrastructure cloud. Ventura held a number of marketing and management roles at Sun, including running its Sun Startup Essentials programme, launched five years ago when Sun was still struggling to right itself after the dot-com bust, to promote Sun wares as the platform for Web 2.0 applications. Both left Sun in the wake of the acquisition of Sun by Oracle in January 2010, and they teamed up with other people from Sun (including Java creator James Gosling and former Sun CIO Bill Vass, who are advisors to the company) as well as employees who hail from BMC Software and BladeLogic, to whip together a business plan and start coding a cross-platform cloud. 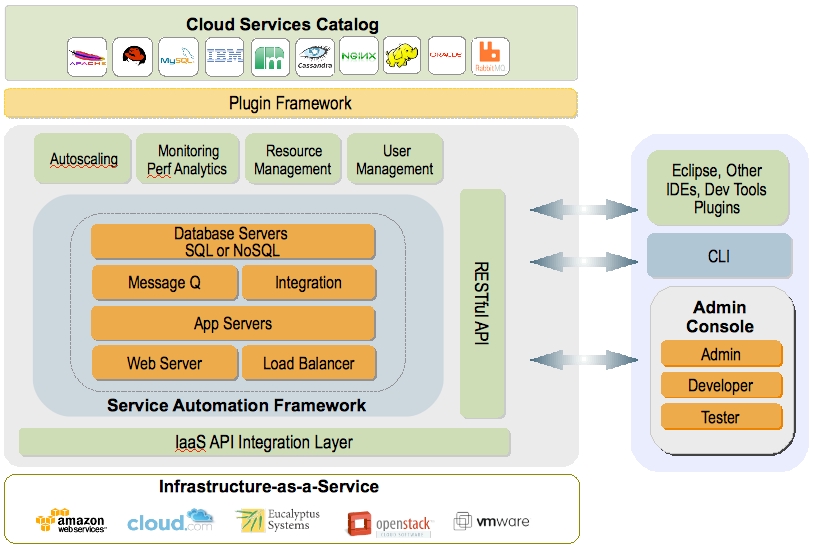 At the moment, the CumuLogic platform cloud is fairly limited in terms of the software it can support. The CumuLogic platform cloud can only run on virtualized x64 servers, although according to Ramchandani, there is no technical reason why it could not eventually be extended to other processor architectures and their hypervisors. "It would be a lot of work on our part, and if we have a need, we will do it," Ramchandani tells El Reg.

CumuLogic will soon run atop infrastructure clouds managed by Citrix's Cloud.com/Project Olympus (not quite a product itself yet), VMware's vCloud, and Eucalyptus Systems' eponymous cloud fabrics in addition to the support for Amazon's homegrown EC2 infrastructure cloud. The plan for the moment is to support the Xen, KVM, and ESXi hypervisors, controlled by Citrix Systems, Red Hat, and VMware, respectively. Support for the OpenStack cloud fabric is in the works.

At the moment, the CumuLogic platform cloud only supports the CentOS clone of Red Hat Enterprise Linux atop these hypervisors and cloud fabrics, but over time it will obviously support other x64-based operating systems as customer needs dictate, with Linux, Windows, and Solaris being obvious choices. Ramchandani did not want to talk specifics here.

On top of this, CumuLogic will support various middleware and database options, exposing them as services that you can interconnect with a couple of mouse clicks. At the moment, CumuLogic supports Apache 2.X and Nginx 0.9 Web servers. Red Hat's JBoss 4.X, 5.X, and 6.X and IBM's WebSphere 7 application servers are also supported as options, and Oracle MySQL and IBM DB2 databases are also supported and converted to services. Java, PHP, and Ruby applications can run on CumuLogic and access these middleware and database services.

Over the long haul, and in due time as customers demand it, CumuLogic will add support for the MongoDB and Cassandra NoSQL databases and Hadoop data munching tool as well as for RabbitMQ messaging and Oracle databases, Ramchandani says.

The CumuLogic platform cloud will keep all of the different images of all this code, formatted for each cloud and hypervisor, in a catalog. The tool keeps track of the provisioning, patching, cross-connecting, and monitoring of that software once it is deployed in a test/dev, QA, or production environment. The idea is to let companies take the code they have, the software components they already use, and run them on a heterogeneous platform cloud as they see fit – either in their own data centers, on public clouds, or a mix of both.

The limited private beta has been running on Amazon's EC2 with CentOS and a bare-bones mix of software atop that, and the news today is that CumuLogic is opening up the beta for its platform cloud to the wider public and at the same time supporting the PaaS tool for internal deployment on Cloud.com or Eucalyptus private clouds using ESXi, KVM, or Xen hypervisors. The plan is to keep the CumuLogic software in a rolling beta until October or so to shake it out and add features, and then let it loose.

Pricing for the product has not been set, but Ramchandani said the plan is to price the in-house deployed licenses based on the number of cores and the public cloud version based on a mix of the number of instances running and the number of applications customers deploy. ®