Indeed, SMART claims that the Optimus can do up to 1GB/sec with wide-port I/O, that these I/O rates will be consistent over the life of the product, and that it snags the performance crown "based on overall performance using a combination of metrics." 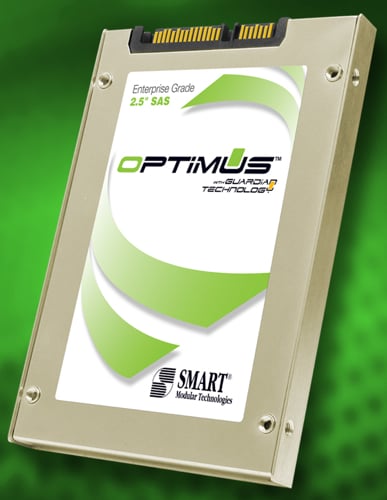 SanDisk's 2-bit MLC Lightning can do 110,000 sustained random read IOPS through a 6Gbit/s SAS interface, but only reaches 360MB/sec. No other supplier matches SMART's combination of IOPS and MB/sec, however – for now, at least – but we are in a game of flash-performance leapfrog.

The Optimus has full-duplex, dual-port, 6Gbit/s SAS interfaces, and SMART says it can do 10 full-capacity writes a day for five years.

Like other suppliers, SMART is branding aspects of its controller technology. There is FlashGuard, which uses signal processing to better read flash cells, like Anobit and also now STEC. It gets the endurance rating up such that SMART can offer a five-year warranty with the 10 full writes a day usage rate.

The Optimus SSD will be going to customers in sample form in September. SMART is not yet revealing pricing, but SVP and general manager John Scaramuzzo says that it will be "at a value point that we expect will accelerate SSD adoption in the enterprise." ®