Can you handle LOHAN's substantial globes?

We invite you to tackle spaceplane launch poser

The matter of our LOHAN's substantial globes has kicked off a right old debate among you, our beloved readers, as rival viewpoints on just how to launch the Vulture 2 aircraft from beneath helium-filled funbags battle for our attention.

To recap, we need to work out just how to launch our audacious Low Orbit High Altitude Navigator spaceplane from beneath helium balloons in as vertical an attitude as possible, and without ending up with a wrecked aircraft.

Our instinct is to go with a single balloon, and the simplest set-up possible. This would consist of an extended launch boom or gantry with the Vulture 2 at the end, and the whole thing counter-weighted to maintain equilibrium.

However, a quick beer mat sketch revealed a few potential problems with this. Here's our initial graphic of the idea, shown roughly to scale: 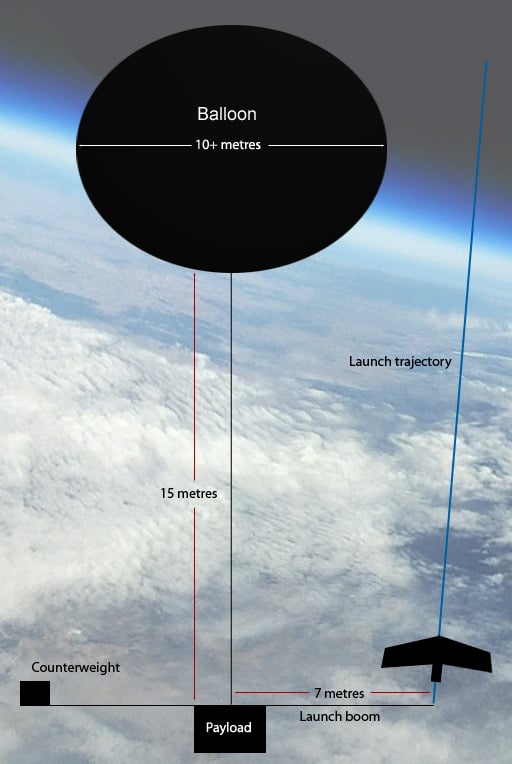 The balloon diameter is based on pumping in 8 cubic metres of helium at ground level, enough to lift around 5-6 kg (11-13 pounds) with a good rate of climb. The Vulture 2's wingspan is 2 metres (6,5ft). As you can see, to achieve a launch trajectory of 5° from vertical, and thereby missing the balloon, the main payload has to be some way below the balloon.

Similarly, the launch boom is improbably extended out from the main payload. This configuration is highly susceptible to wind action, and in any case we're pretty well convinced it's too heavy to be within safe and legal weight limits.

The matter of weight is crucial. The balloon has to lift itself (1.5kg in the case of our PARIS project), the recovery parachute (around 500g, just over 1 pound, not shown), the main payload (unkown in the case of LOHAN) and the aircraft.

The total weight of all this has obviously has to be as light as possible, and must fall within the prescribed limits including the Vulture 2, in case the launch fails and the aircraft has to return to terra firma with the main payload. Call the total 5kg maximum, for cash.

Well, plenty of you evidently have ideas as how the thing can be done, and a lot of your suggestions include multiple balloons. We're keeping an open mind, and invite you to submit rough sketches of your cunning plans.

We'll have a look, knock together a round-up of the best ideas for perusal by your fellow experts, and take it from there. If your concept is particularly excellent, or indeed the one we finally run with, we'll award you a highly exclusive piece of Special Projects Bureau merchandise.

Email your sketches to me here. Include as much detail as possible, but don't worry too much about the quality – we'll knock 'em into shape here at the SPB fab bunker. Get to it... ®