Rupert Murdoch may soon have his front door kicked in by the US's Federal Aviation Administration, amid accusations that News Corporation has been operating an illegal air force.

According to this report down at Forbes, the media magnate's fondleslab-friendly e-rag The Daily is flying a md4-1000 microdrone (pictured), which back in May captured some aerial footage of storm-wracked Alabama. 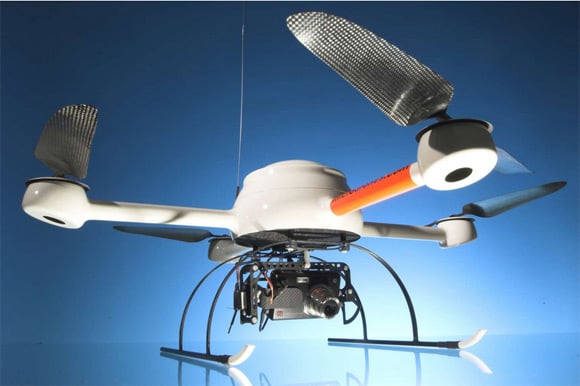 Nice vid, but The Daily may be in breach of FAA regs regarding "operations of unmanned aircraft in the National Airspace System". As Forbes notes, the FAA requires wannabe drone pilots to have an airworthiness certificate for their "Unmanned Aircraft System" (UAS) and an "experimental certificate" which limits them to "research and development, marketing surveys, or crew training".

The FAA notes: "UAS issued experimental certificates may not be used for compensation or hire."

He later added: "We are examining The Daily's use of a small unmanned aircraft to see if it was in accordance with FAA policies."

The md4-1000 has a ceiling of 1,000 metres, and can operate within a radius of 1,000 metres (3,280 feet) via radio control for up to 70 minutes. Its maximum payload is 1,200g (2.64lb), meaning it can easily lift a camera and an electronics package such as that carried by the Wireless Aerial Surveillance Platform aircraft, aka WASP.

The WASP's compact computer may of particular interest to News Corporation since it is capable of sniffing Wi-Fi networks and intercepting mobile phone calls. ®