Battle of the, um, CONFIG.SYS

A lawsuit has accused Apple of violating a patent describing a means of "quickly booting a computer system".

Late last week, an outfit calling itself Operating Systems Solutions filed suit in the Middle District of Florida, claiming that Apple infringes its patent with Mac OS X. As pointed out by Patently Apple, the patent in question – RE840,092 – was originally granted to LG Electronics.

The patent describes a method for quickly booting a personal computer system using information that was previously saved to hard disk. This information includes data from memory and the status of devices attached to the system, and it hinges on a POST routine.

"The method for a quick boot process includes the steps of performing a power-on self test (POST) operation when a personal computer system is powered on or a reset button is pressed; performing a normal boot process after the POST operation; saving the contents of memory and the status of the attached devices to a hard disk; checking if a reboot is requested; restoring the saved boot configuration information from the hard disk, after POST is completed during the reboot process; checking whether or not an initial device configuration file and/or an automatic batch file were changed; and executing commands in the two files and saving a newly created boot configuration information to the hard disk for future boot," the patent reads.

"The personal computer system, may reboot quickly because of omission of execution of the initial device configuration filed and the automatic batch file."

Yes, the patent specifically discusses CONFIG.SYS and AUTOEXEC.BAT files, carefully laying out the entire boot process for an IBM PC running MS-DOS. But it says the scope of the method is broader. "Though the description hereinbefore may refer to terms commonly used in describing particular computer systems and software, such as IBM personal computer and Windows95 operation system, the concepts equally apply to other systems and software," it reads. 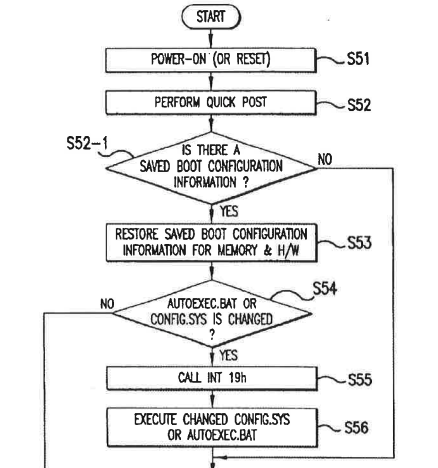 A glimpse of the OSS 'quick boot' patent

The lawsuit does not specify a version of Mac OS X that allegedly violates the patent, but it does say that Apple is in violation for selling the MacBook Pro. With the suit, OSS wants compensation for its lost profits as well as damages. ®