For much of the past decade the “networking” that connects users to their applications and services has often been taken for granted. But if general networking has been less than widely appreciated, the networks that tie servers to storage have been almost invisible to everyone bar the all-too-few skilled storage administrators who delve into to the art. Many organisations are contemplating significant changes to their IT architectures and IT vendors are promoting a raft of new technologies in the storage arena. This brings up the issue of whether it is it feasible to bring specialised storage networks and general Ethernet data networks together?

General networking is now very firmly based around the TCP/IP protocol and Ethernet whilst storage networking is still grappling with many protocols and network technologies. Amongst these, perhaps the most firmly entrenched is Fibre Channel, a lossless, deterministic protocol designed to ensure that any data sent to the storage disks gets there with minimum latency and very little chance of data corruption. These characteristics were not originally enshrined in the standard Ethernet protocols employed for general networking. While work to incorporate these has continued apace, support is still far from universal and the need for new approaches, equipment and tools has a resulting uptick in the equipment cost.

The networks that tie servers to storage have been almost invisible to everyone bar the all-too-few skilled storage administrators who delve into to the art.

So is it possible to get storage traffic and general network traffic to cost-effectively share a common cabling system, namely Ethernet? Technically the answer is yes, as protocols such as FCoE (Fibre Channel over Ethernet) and iSCSI have now matured sufficiently for mainstream adoption. It is apparent that organisations are beginning to contemplate converging their networking stacks as well as management and with it the cabling infrastructures they employ.

The cost savings of cabling only one storage and data network is attractive as is the flexibility potentially available for dynamic reconfiguration. But there are significant challenges between contemplation of such a change and things happening on the ground. For one, network cable infrastructures have very long lifetimes and replacing them is by no means simple to achieve. 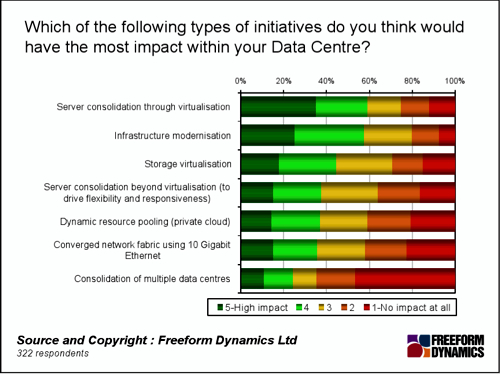 Despite this, as the chart indicates, organisations are becoming aware of the impact that converged networks could have, even if their implementations have yet to ramp up. That said, there are questions concerning the feasibility of running storage and application traffic on the same physical networks without either users or applications, being affected by service degradation?

The answer is ‘yes’, but expecting it to just work out-of-the-box would be asking a bit much. Managing the complexity of convergence will require sophisticated traffic monitoring and management tools to ensure that service quality is maintained at desired levels. An understanding of the base line for the current usage and service quality combined with projections of future growth requirements of each of the services to be delivered over the network is essential – yet few organisations undertake such management processes routinely today.

To use a network to support all forms of traffic will require new processes to be put in place as well as the use of new tools. The lack of much “established best practice” to date coupled with significant costs and operational challenges make it highly likely that the adoption of combined networks will take place over many years, not months.

Tony Lock is a Programme Director at Freeform Dynamics, responsible for driving coverage in the areas of Systems Infrastructure and Management, IT Service Management, Outsourcing, and emerging hosting models such as Software as a Service and Cloud Computing. He also considers the role of financial models in relation to IT investment.

Still a conundrum or all clear?

What can we draw from this? Technically running FCoE over Ethernet is okay, as Greg Ferro explains, and it presents interesting possibilities with virtual machines (Duncan HUghes) but don't expect it to work fresh out of the box. It has to be planned, managed and monitored carefully because this is going to be a "version 1" initiative. Converged Ethernet networking is not a silver bullet and needs careful and thorough preparation and implementation so you don't shoot yourself in the foot.