At some point in the future

Facebook said it plans to add a new security feature that will allow mobile device users to reset their password so they can regain access to their accounts.

Mobile password reset, which was announced Monday, will give mobile users the ability to identify their accounts and and choose which email addresses should receive recovery links. It will also offer additional ways for users to confirm their identity that weren't elaborated in the blog 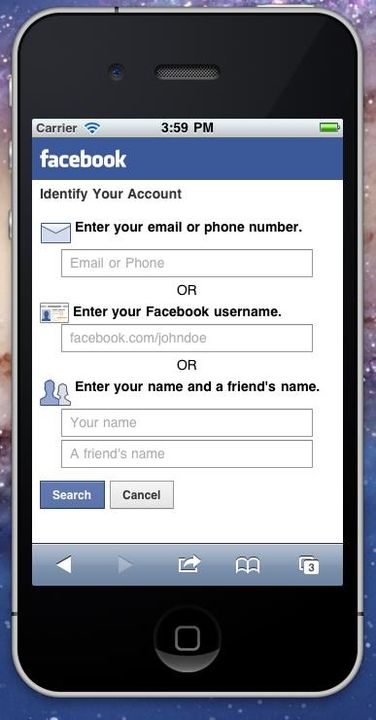 “If you ever forget your password or get locked out of your account, we want to make it easy to get back on Facebook," Dan Muriello, an engineer on Facebook's integrity team, wrote. “We are testing the ability to reset your password from your mobile device.”

Facebook engineers plan to roll out the reset feature “slowly” so they can gather feedback as they go.

The ability to reset passwords from mobile phones builds on previous security enhancements offered by the social network. The site can now send emails or SMS messages each time a user's account is accessed on a new computer. It also filters sites known to be malicious and offers protections against some clickjacking attacks.

Google, meanwhile, has offered a more robust set of security protections, including two-factor authentication using mobile phones, and a list of recent IP addresses that have been used to access an account.

The password reset feature was announced in the same post that outlined a new social-reporting feature also being rolled out to mobile users.

“If you are reporting something you don't like, we want to make it easy for you to communicate with the person who posted it, Muriello explained. “For example, if you don't like a photo of yourself that someone uploaded, you can use social reporting to ask that person to take it down.”

Sounds like a fine idea, though it wouldn't be surprising if bad guys figured out a way to abuse the feature to spam, attack, or harass. ®