We sort of knew we'd rue the day we asked you lot for your suggestions as to how exactly to launch our Low Orbit Helium Assisted Navigator (LOHAN) spaceplane, and so it turned out to be, as were were buried under a veritable bucketload of ballockets.

What we're looking for here is a practical way of getting the rocket-powered Vulture 2 off the launch pad at the highest altitude possible, without the whole thing going completely titsup, and in the process destroying both the aircraft and the helium balloon.

You can find our initial concept, and our observations on possible problems, right here.

And now here are your ideas. You're advised to stick the kettle on and dust off a substantial mug, because your going to need plenty of tea to work your way through this lot.

First up, we did say we'd rework your sketches, but then we decided we just didn't have time if we were going to present as many as possible. We also considered it pretty well obligatory to kick off with Dan Lakey's "highly detailed sketch" of the Vulture 2.

Dan explains: "Essentially, sticking some feathers shuttle-cock style on the rocket 1st stage will pull the centre of aerodynamic pressure to the back of the craft. This will make it point skywards, pivoting about the centre of mass.

"So, simply, fire it horizontally and let physics take care of the rest. Drop the 1st stage with the feathers once it's burned out, and the plane reverts to glider-mode. Maybe add a 2nd stage for some fun, because you never can have enough explosives."

Hmmmm. A few of our beloved commenters have already pitched the idea of thrust vectoring, which would allow a horizontal aircraft launch and subsequent majestic arc to the vertical. Dave Gurr also decided to tackle the balloon clearance problem from the Vulture 2 angle.

He says: "Couldn't you have some kind of detachable 'launch wing' attached? You'd have the whole vehicle hanging under the balloon, simply pointing down. The surfaces of the launch wing would be designed to give the whole vehicle and inverted parabolic trajectory ... so that it falls first and then points upwards. At which point some sort of attitude-sensitive microswitch would trigger the rocket and jettison the launch wing." 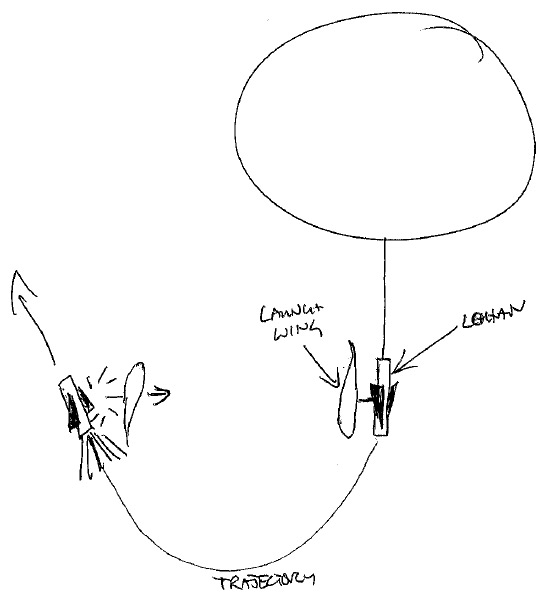 Interesting, but it could prove technically tricky. Less is more, we believe, and Calvin Partridge suggests "skipping the complicated stuff and going for a top launch…" 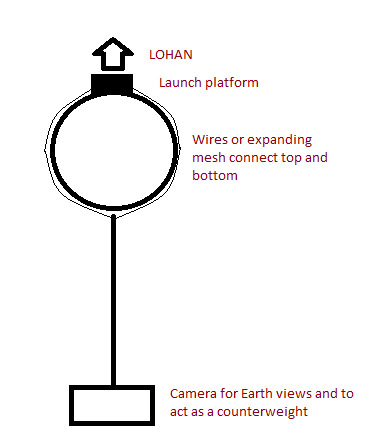 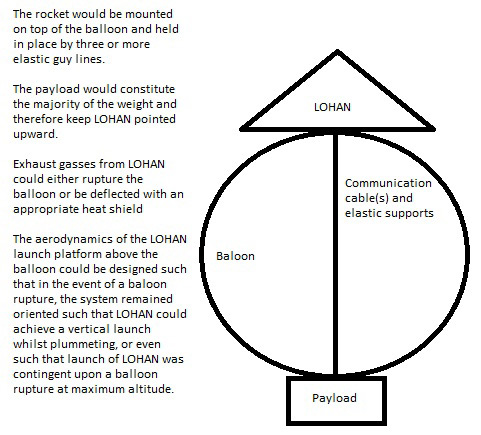 Sticking the spaceplane above the balloon/s proved very popular, and here's an alternative solution courtesy of Ian Parker. (It's a quick tip of the hat to Thomas Boys and Michael Fenn as well, for sketching the same idea)

Ian says: "This layout would nearly eliminate the risk of the launch hitting the balloon, and the recovery parachute could be used as part of the counterbalance at the bottom of the apparatus (and hey it puts LOHAN on top where she should be)." 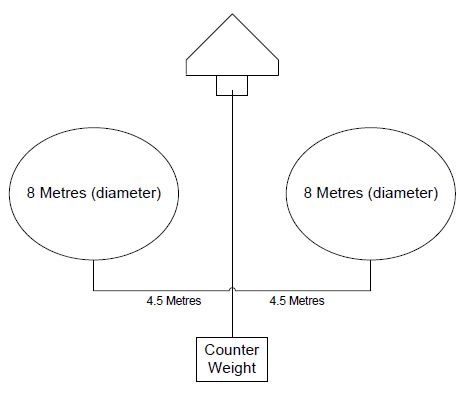 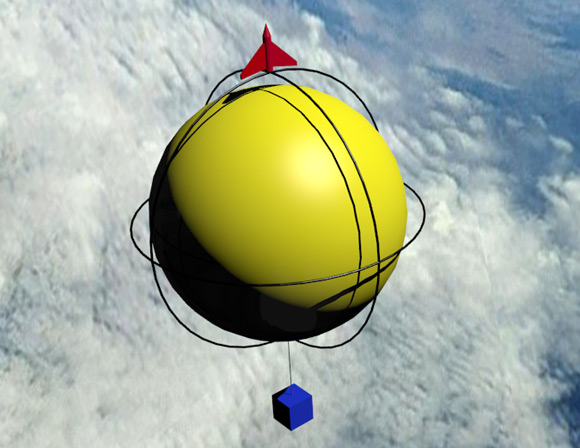 Mark elaborates: "Carbon fibre rings enclosing the balloon (possibly with a mesh surrounding the balloon to protect against premature bursting) large enough to contain it when fully expanded with the rocket mounted on top and the payload on the bottom. It would allow a clear launch platform and with the potential for wide angle cameras around the circumference of the rings…"