The mythology of the IBM PC's operating system has it that the company approached Digital Research (DR), creator of the CP/M OS, but found it lacking in enthusiasm for the project. Microsoft's Bill Gates got wind of this and pitched MS-DOS instead.

In fact, it's likely IBM selected CP/M-86 but was forced to look, at least temporarily, elsewhere as DR's effort to port CP/M to the Intel 8086/8088 CPU was taking longer than planned. Gates may well have pitched an alternative - IBM was already talking to Microsoft about using the latter's implementation of the Basic programming language - and appears to have won the deal in November 1980.

Not long after, Microsoft licensed 86-DOS from Seattle Computer Products (SCP), specifically to sub-license the OS to IBM in turn. 86-DOS had been created by SCP as a stand-in for CP/M-86 and was thus intentionally compatible with the DR OS.

IBM agreed to use 86-DOS, which in July 1981 was acquired in its entirety by Microsoft and renamed MS-DOS. IBM would bundle it as PC-DOS. 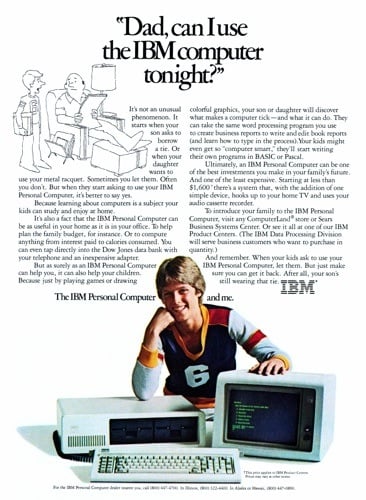 Not just for grown-ups

At launch, IBM said it would offer CP/M-86 for the 5150. "IBM has contracted with Digital Research... to make CP/M-86... available for the IBM Personal Computer," the company said on the 5150's day of launch. "We expect [its] availability will provide the opportunity for many current applications to be transferred to the IBM Personal Computer with minimal modifications."

Next page: Send in the clones
Page: