Life on Earth gets wiped out every 27 million years, say boffins

Much of life on Earth gets regularly wiped out every 27 million years, according to boffins. It had been thought that this was caused by a dark star named "Nemesis", but apparently that was wrong. The next globo-extinction event is due in about 16 million years' time. 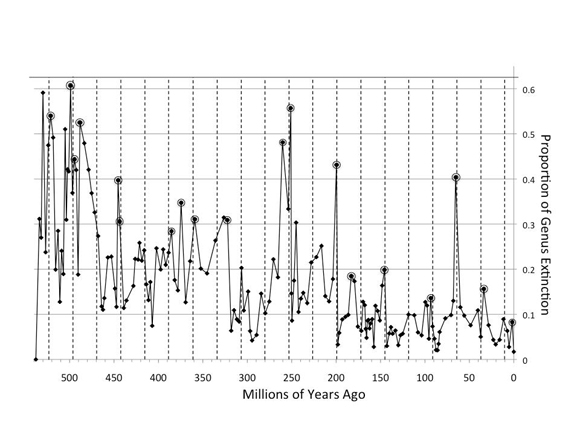 The revelations are made in a new paper from paleontologist Richard K Bambach of the Smithsonian Institution and astronomer Adrian Melott, flagged up by the Physics arXiv blog and viewable online here.

According to Bambach, there's no doubt at all that every 27 million years-odd, huge numbers of species suddenly become extinct. He says this is confirmed by "two modern, greatly improved paleontological datasets of fossil biodiversity" and that "an excess of extinction events are associated with this periodicity at 99% confidence". This regular mass slaughter has apparently taken place around 18 times, back into the remote past of half a billion years ago.

This had previously been noted by other scientists - though not confirmed so far back into the past - which had led to theorising on what could have caused such long-separated, regular disasters.

One theory which seemed to fit the facts was the "Nemesis", the idea that a huge, dark companion body orbits the Sun so far out that it comes near only on a 27-million-year cycle. At that point it ploughs into the Oort Cloud - the zone beyond the planets where comets spend most of their time - and causes a shower of comets to rain into the inner solar system, smashing up life on Earth.

Unfortunately, according to Melott, the very regularity of the extinctions means this can't be true. At various points in the last 500 million years the Sun has passed close enough to other stars that any Nemesis object would have had its orbit significantly affected, so that the sequence of disasters on Earth should have changed interval.

We confirm the originally noted feature in the time series for extinction. However, we find that it displays extremely regular timing for about 0.5 Giga-years. The regularity of the timing compared with earlier calculations of orbital perturbation would seem to exclude the Nemesis hypothesis ...

According to the handy chart furnished by Bambach and Melott above, one can see that the apocalypses don't exactly run like a Swiss watch. The mass die-offs (circled peaks) are usually pretty close to the vertical dotted lines showing the 27-million-year time tick, but they can easily be a few million years off either way.

They aren't universally fatal, either: the last one saw less than ten per cent of all species then alive wiped out.

If nobody manages to work it out, and provided that humanity doesn't meanwhile become disembodied minds, depart in an interstellar exodus or get wiped out early in some kind of unscheduled disaster, we'll eventually find out by observation what the underlying cause is. The next dotted line is due in 16 million years, but the associated extinction could be as much as 10 million years early. ®