And it's Apple's own fault

Open...and Shut Mergers and acquisitions used to be how a company bought revenue, customers, or cool technology. In the mobile world, it's increasingly a way to buy defensive patents.

This was clear in Google's $12.5bn acquisition of Motorola Mobility, and it will unfortunately fuel many of the strategies Apple, Google, and others employ to kill competition.

As much as we worried about overpriced engineers, perhaps there will now be a run on overpriced attorneys.

Apple, the company that prides itself on building beautiful things, is partly to blame. They've now built a beautiful patent mess, one that may have been merely designed to stop Android, but which but mostly just makes mobile computing an unpleasant business in which to compete.

However much some observers may want to explain away Android's success by claiming that its tablet momentum is a mere matter of shipments and not real adoption, the reality is a bit different. Or, rather, it soon will be.

Consider that Android has already displaced iOS at the top of the smartphone heap, according to Gartner and a number of other analysts. 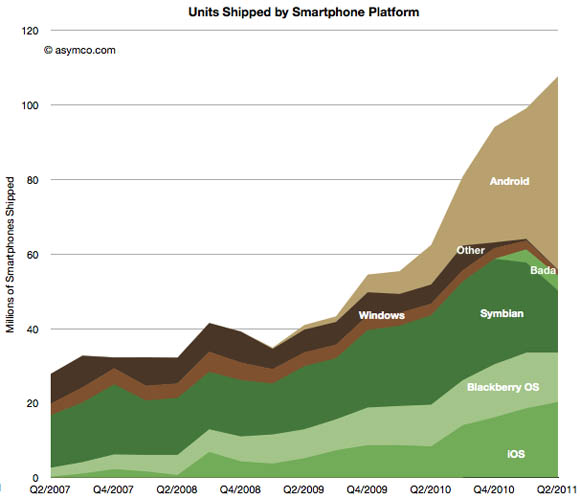 First, Google doesn't make money directly from Android, and it really doesn't matter to Google how profitable its OEMs happen to be. The more smartphones and tablets there are on the market, the more money Google makes from advertising and other indirect revenue sources. In fact, while Apple is the single largest recipient of mobile-advertising money among the smartphone manufactures, as a group Android OEMs dominate the category.

Second, it's critical to remember who buys Android devices versus iOS devices: kids buy Android ("It's cheap!") while adults largely buy iOS ("Pricey, but it makes me cool with the other soccer dads!"). Guess which group will be buying devices long into the future?

But not yet, of course, the current tablet buyer. That's still an Apple iPad market, as The Wall Street Journal reports, and for good reason. Apple basically created the market and has the best product at a price that remains very competitive with its would-be competition.

For now. After all, what are the tablet vendors doing now that they have inventories of high-end tablets sitting on the shelf? They're discounting them.

Guess what? I'm betting that discounts will move competing Android tablets, just as they have moved Android smartphones. Android hasn't won because it's better. It has won because it's cheaper. Will an influx of significantly cheaper Android-based tablets win market share from Apple's iPad? Almost certainly.

Which brings us back to patents, the last refuge of scoundrels and mobile competitors.

Apple has been patenting anything and everything related to tablets, and is now trying to block Android tablets from ever seeing the market. Apple's Steve Jobs can declare victory all he wants at Apple love-ins, but the reality is that Apple has serious cause for alarm: cheap Android is going to eat its high-end lunch in tablets just as in smartphones, unless it can litigate away the threat.

With Google's acquisition of Motorola Mobility, Apple's trigger-happy patent strategy took a knock – 17,000 of them to be exact, which is the patent pile that Motorola Mobility amassed over the years, with 7,500 more applied for but not yet granted. Microsoft, which had hoped to sue its way into mobile relevance, also has to come up with a Plan B.

Small wonder, then, that Google CEO Larry Page called out patents in defense of the acquisition. Yes, Google still needs to figure out how this will affect its hardware partners such as HTC and Samsung, as Forrester and others have pointed out, but I doubt Google intends to hold onto the hardware business for long.

No, this deal wasn't about building an integrated, Apple-like experience for Android-based tablet and smartphone users. It was about stopping the Apple-like patent madness that is the only real threat to Android's mobile dominance, and that could have cost Google $2 billion each year.

Apple builds great products. There's a reason I'm typing this on a MacBook Air and researched this article using my iPad and iPhone. But as Apple faces an onslaught of cheaper, faster Android tablets and smartphones, with more developers poised to jump on the Android tablet bandwagon, Apple has a serious fight on its hands.

And not one that can be won with attorneys anymore.

Thankfully not. According to MDB Capital Group, Research in Motion has applied for or received 3,314 mobile-related patents, Nokia has 2,655, and Microsoft has 2,594. It's ridiculous to think that all of those patents cover very different aspects of mobile computing. Throw in Apple's and Motorola Mobility's thousands of patents, and the silliness becomes even sillier.

These patents almost certainly overlap to a great degree, and many of them are worthless to begin with. The sooner we get back to competing on product quality, innovation, and price, the better. ®