Computer scientists have developed an Android app that logs keystrokes using a smartphone's sensors to measure the locations a user taps on the touch screen.

TouchLogger, as their demo app is dubbed, allowed its creators at the University of California at Davis to demonstrate a vulnerability in smartphones and tablets that has largely gone unnoticed: While most of these devices lack physical keyboards that have long been known to leak user input, they nonetheless remain susceptible to monitoring through similar side-channel attacks.

Whereas eavesdroppers measure sound and electromagnetic emanation to capture input from traditional keyboards, they can monitor the motion of the device to achieve much the same result from a touch screen.

“Our insight is that motion sensors, such as accelerometers and gyroscopes, may be used to infer keystrokes,” the researchers wrote in a paper (PDF here) presented last week at the HotSec'11 workshop in San Francisco. “When the user types on the soft keyboard on her smartphone (especially when she holds her phone by hand rather than placing it on a fixed surface), the phone vibrates. We discover that keystroke vibration on touch screens are highly correlated to the keys being typed.” 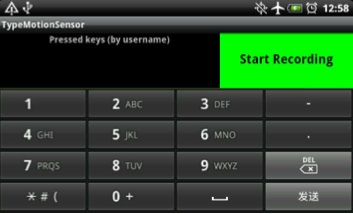 Applications like TouchLogger could be significant because they bypasses protections built into both Android and Apple's competing iOS that prevent a program from reading keystrokes unless it's active and receives focus from the screen. It was designed to work on an HTC Evo 4G smartphone. It had an accuracy rate of more than 70 percent of the input typed into the number-only soft keyboard of the device. The app worked by using the phone's accelerometer to gauge the motion of the device each time a soft key was pressed.

With minor refinements, the researchers believe they can expand the effectiveness of TouchLogger, as well as the devices it will work on.

“The tablet has a larger screen, so hopefully we can get a higher accuracy rate on a qwerty keyboard,” said Liang Cai, a graduate student in UC Davis's computer science department who collaborated with his advisor Hao Chen. “We didn't really try it on a large scale of devices.”

Besides targeting devices with larger touch screens, the researchers said TouchLogger could also be improved by tapping other sensors built into the targeted device. Prime candidates include gyroscopes to measure the rate of rotation and a camera to further detect motion. The scientists noted that the W3C recently published a specification for web applications to access accelerometer and gyroscope sensors using JavaScript. They are in the process of extending their work into a full research project.

For now, they hope to get the word out that the motion detected by a smart device's own sensors could expose highly valuable information, including passwords, social security numbers and credit card numbers.

“We hope to raise the awareness of motion as a significant side channel that may leak confidential data,” they wrote. ®