Accessory of the Week If you had thought that Motorola’s Android offerings might have ended up as the also-rans in the mêlée of Googlephone handsets, then recent events in the mobile marketplace would suggest it could well be the standard bearer. The Chocolate Factory’s bid for Motorola’s Mobility division – the handset and tablet line – certainly seems to suggest that buying into Motorola kit might not be a bad idea. It's not like there haven't been a few temptations either. 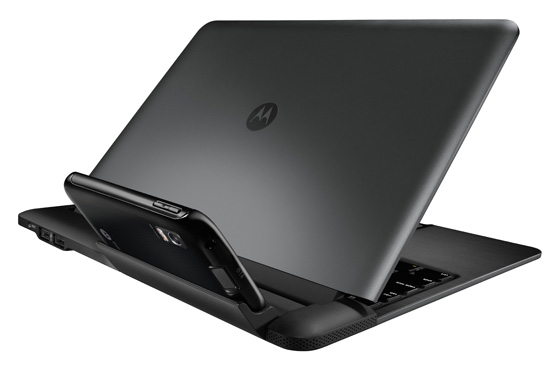 The Motorola Atrix Android handset has a suite of accessories that go beyond the typical docking options to transform it from a dual core Android smartphone into an multimedia hub or even a netbook. With the latter, the Atrix slots into the back of a very slimline looking notebook and phone's CPU runs the show.

Called the Lapdock, it has a 11.5in screen with a 1366 x 768 resolution. Round the back, besides the swivelling dock for the phone, you also get two USB ports and speakers on each corner.

There’s a PSU input too, which not only charges the docked phone but the internal battery within the Lapdock which extends the working life of this combo. When unplugged from the mains, the Lapdock battery still charges the phone when docked, so even if big picture battery dies, you can still resort to the small screen as the handset should still be topped up.

Docking the phone and opening the lid fired everything up, which takes around 20 seconds for the handover if you’ve not had the two running together in a while. At other times it was alive and kicking less than ten seconds. 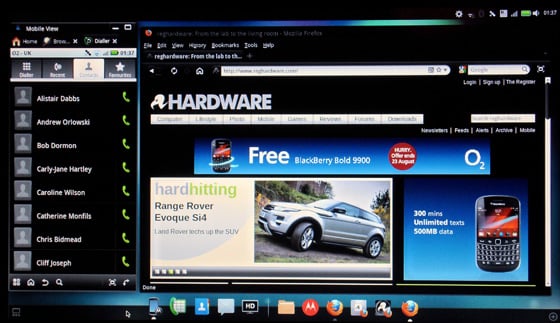 When docked, the Atrix display is blanked out and you're greeted by the phone's homescreen in the corner and a bunch of icons in a dock that's all very Mac OS X stylee – even the mouse pointer is black. The dock or App Tray is split in two with shortcuts to phone functions on the left and the full-screen ‘Webtop’ apps on the right. You can initiate and receive calls too, with the internal speakers making for a perfectly usable handsfree experience.