But as big a problem as batteries are in the mobile market, there are much more fundamental challenges that will make the future of the microprocessor market different from its past.

For one, the complexity of chip design and the intricacies of the physics involved is increasing, making design a much riskier and more demanding process. "And you really, really need to worry about that," Segars said.

The reason for that worry is risk and cost. "The cost of your tape-out is going to be astronomical," he said. "When you've written that check for a million or two million dollars for your [chip-making lithography] masks, you want to hope that chip works. So the effort going into validating and verifying a design has gone up by orders of magnitude."

Another challenge that Segars sees is caused by the increasing stratification of the semiconductor industry – a development that has brought many benefits, but which also has its downside.

"When prople first started building semiconductor devices," he said, "they did everything themselves in fully vertically integrated companies. People had fabs, product design, manufacturing, case design – they did the whole thing themselves."

That has changed over the years – mostly for the better, from Segars' point of view – and now the industry is filled with companies specializing in various areas such as design, IP, electronic design automation (EDA), packaging, chip-baking, and so on.

This specialization has been great for spreading the costs and risks around, and for taking advantage of the economies of scale – TSMC and Global Foundries, for example, produce silicon for many different fabless chip designers.

But with more companies focusing on design rather than manufacture, Segars sees a danger. "The skills you need to close out the timing at the transistor level are becoming a dying art," he warned.

"As we go forward, and start worrying about very exotic processes that we're going to have to deal with in the future, those transistor skills are going to need to become very, very important once again," he cautioned. "And as a designer, you're going to have to worry about everything – from architecture down to transistors."

But no matter how "disaggregated" the semiconductor industry becomes, eventually somebody has to actually manufacture the chips themselves. Segars reminded his audience of the famous quote from T.J. Rodgers of Cypress Semiconductor that "Real men have fabs," but then pointed out the obvious fact that there are far fewer fab companies around than there used to be – and that such shrinkage in the manufacturing base poses its own problems. 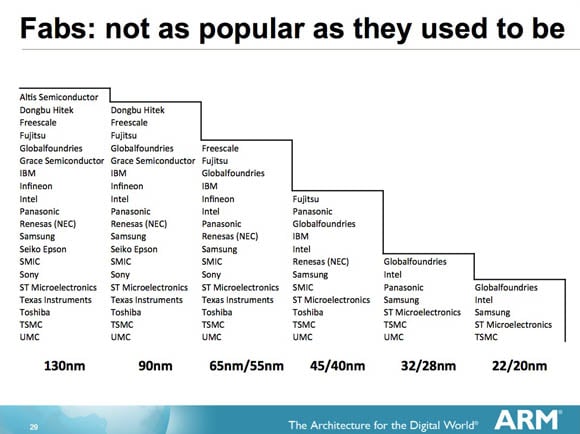 As process size shrinks, so do the number of fabs able to produce chips at those geometries (click to enlarge)

From a customer's point of view, a small number of strong, efficient, advanced fabs is not a problem – in fact, the same economies of scale that make industry disaggregation a good thing make fewer, busier fabs a good thing.

Four customers does not a market make

But there is one potentially troubling problem, Segars said – and it's not for the fabs or their customers, it's for equipment suppliers. "The physics problems that you have to solve when you go to smaller and smaller geometries are getting harder and harder to solve, and so the cost of the equipment that you need for the next generation process goes up and up."

That price inflation is not in and of itself the real market problem, though. "The problem is that the supply chain that builds that equipment for the foundries has a bit of trouble dealing with its return on investment."

Simply put, the foundry-equipment market is shrinking. "When the world moved from 200 millimeter wafers to 300-millimeter wafers, if you were [fab-equipment manufacturer] ASML or somebody like that, you had a whole lot of customers that you could go and sell that equipment to."

Now, however, the move to 450-millimeter wafers is the new hotness – which is great for economies of scale at the foundry level, but not so great for foundry-equipment makers. "There's only going to be about four guys who are going to build those size wafers," Segars said, "so if you're doing all the R&D and your customer size is four, that is a bit of a problem."