Also much of meatspace capital

As fighting rages around Colonel Gaddafi's compound in Tripoli, hackers have taken the fight online to the country's domain name registry nic.ly.

The site's homepage now hosts an image of the rebel flag and the message "bye bye Gaddafi", as well as the date 17 February, the day Libyan protestors started demonstrations and were shot at by security forces, computer security firm Sophos reported. 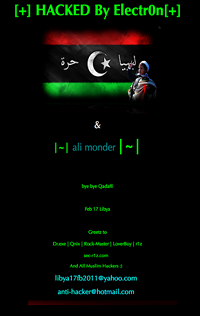 Heavy fighting is being reported in the streets of Tripoli today after rebels seized large parts of the city on Sunday. Gaddafi's whereabouts remain unknown, but it has been widely reported that the rebels claim to have captured his son Saif al-Islam.

Today's fighting has followed a sustained push by rebels to topple the Gaddafi regime. Protests in early February in Benghazi turned violent when security forces opened fire on the protestors, leading to the first military action at the end of the month when Anti-Libyan government militias took control of Misurata.

In March, the Libyan National Council declared itself the sole representative for the country and began gaining recognition from Western nations, as well as Middle Eastern states including Qatar. By mid-March, NATO began its military intervention with airstrikes in the country.

Over the summer, the fighting continued as rebels slowly made their way towards Tripoli while the International Criminal Court in The Hague issued arrest warrants for Gaddafi, his son Saif al-Islam and his head of intelligence.

Finally, on Sunday, rebels entered the city, facing little real resistance according to reports on the ground. This was despite calls from Gaddafi on national television for supporters to take the streets and fight for him.

Hacking, social networks and the internet have become a growing social and political tool in the Arab world, galvanising protests and helping protestors to make wide-reaching statements. At the beginning of the war, Gaddafi attempted to strangle rebel communication by cutting Libyans off from the internet, but they are back online today after 150 days.

Messages such as "Libya is free" and "The tyranny is over" have been appearing on Twitter and Facebook in the last hour. ®