An Oz PhD student has pulled of a bit of a blinder by hitting 40,575 metres (133,120 ft) with a helium-filled meteorological balloon - a UK record and pretty close to the all-time international amateur altitude maximum.

University of Adelaide electronic engineering alumnus Mark Jessop normally does his High Altitude Ballooning (HAB) in the Lucky Country, but popped over to Blighty to participate in the UKube-1 satellite project with the University of Bath.

He hooked up with Cambridge University Spaceflight (CUSF) to launch the Horus 15.5, which took off on Saturday from the city's Churchill College with the able assistance of CUSF's Ed Moore and Adam Greig, as well as HAB newbies Rob Thompson and Mark Cullen.

This launch vid gives some idea of what a bugger to handle these balloons can be if there's even a whiff of a breeze:

Mark told El Reg: "The payload contained a telemetry beacon called 'MiniNut' - This was it's first test flight. MiniNut is a very small PCB (5x5cm) which collects data from a GPS, temperature sensors, and a pressure sensor, and transmits it via a 434.650MHz radio module at 300 baud. MiniNut was powered from 4 Energizer Lithium AA batteries - these batteries work very well down to -40 degrees C, and lower! The total payload weight was 142 grams."

He added: "The original aim of the launch was to test the MiniNut's pressure sensor at extremely high altitudes. Breaking the UK altitude record was just a bonus!

Proof that the record had been broken came while Mark and team were sitting in The Granta boozer in Cambridge. The online tracking map is right here, showing how the payload was consigned to a watery grave in the North Sea off Norfolk: 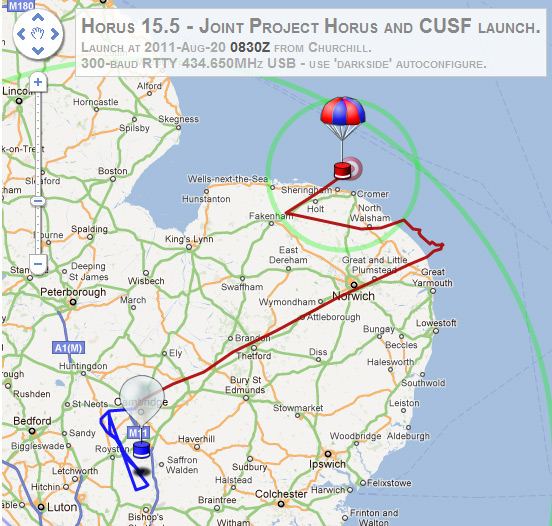 Mark explained: "We make use of a tracking system which allows listeners from all around the launch area (in this case, all over Europe) to upload the data they receive automatically. For the first few km of ascent only we at the launch site could receive data, but as it got higher listeners around UK started uploading data. This allowed us to pack up, move to the pub, and track it on the web!

"While we were eating lunch we couldn't easily use our laptops, so we were monitoring the UK High Altitude Ballooning IRC chatroom on our phones, where other listeners were updating us with the current position and altitude. For quite a while we were calling out the current altitude to each other while eating our lunch, and we did get a few weird looks from other patrons at the pub, especially when we passed the 40km point."

Rather disgracefully, Mark explained he didn't sink a few celebratory ales, defending: "I much prefer Australian beer (and I'm not talking about Fosters, that stuff is horrible)."

Moving quickly on, before he provoked an serious Oz/Pom beer diplomatic incident, Mark said of his next foray into the upper atmosphere: "After coming so close to the world amateur ballooning altitude record, I'm now determined to beat it! To do this, I need a lighter payload. I've started work on what I call "MicroNut", a telemetry payload only 5x2.5cm in size."

Mark will soon be heading back Down Under where he'll be able to celebrate his high-altitude success with a proper beer. He concluded: "Project Horus also have a launch planned for mid-October where we'll be taking part in the Scouts' 'Jamboree of the Air'. We'll be launching a radio repeater up to 30km, which Scouts around Australia will be able to talk through. For this launch we aim to include a system that allows us to release gas from the balloon, letting it float at an altitude we choose." ®