You want flash disruption? You got it. Pure Storage's FlashArray is cheaper and faster than enterprise disk drive arrays but just as available and reliable. Cue major oops and headaches in Hopkinton, Sunnyvale, Palo Alto and other storage vendor HQ locations.

Pure Storage is coming out of stealth with a product and significant new funding from Samsung and others.

So far, Huawei-Symantec, Nimbus and Violin have announced all-flash storage array products with eBay and a mystery European rail service buying into the idea. Now Pure Storage says it has a product that can scale to 100s of terabytes and is being positioned as a drop-in replacement for enterprise primary data disk drive arrays from EMC, HDS, HP, IBM, NetApp and any other supplier.

The FA-300 Series is an all-flash array, with dual active-active controllers linked by 40Gbit/s InfiniBand, looking after a pool of virtualised, 2-bit, multi-level cell flash. Pure Storage claims it is "10x faster and ... 10x more space and power efficient, at a lower per gigabyte price than disk-centric arrays, including performance disk, flash retrofits and flash/disk hybrids." This is when HDD arrays are configured with RAID protection and for high availability. 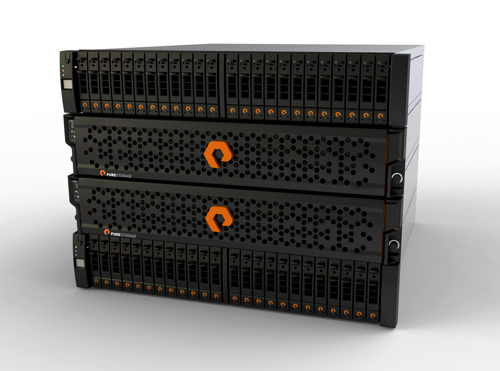 It has, initially, a Fibre Channel interface to accessing servers and is "plug-compatible with existing virtualisation, database and cloud-oriented infrastructures." We understand IP-based interconnectivity will be supported at a later date.

The FA-300 is said to scale from tens of terabytes to hundreds of them.

Data stored in the arrays is deduplicated inline and compressed to increase storage efficiency. The dedupe has been devised in-house by Pure Storage and uses 512 byte blocks or segments. It's a permanent feature and cannot be turned off.

The Purity operating software implements RAID-3D, a form of RAID specifically designed for flash. It implements three layers of independent parity, protecting against multiple drive losses, flash bit errors and variability in flash performance. It also provides, the company says, consistently low latency of under 1 millisecond, partly by ensuring individual SSDs only write or read at any one time and not do both.

Pure Storage CEO Scott Dietzen says that his company's arrays are more cost-effective that disk-based alternatives and thinks customers could need up to 50 per cent fewer database servers to access their databases on an FA-300 box. This would reduce the number of Oracle licences needed.

He said: "Customers are currently spending about $20bn per year on performance disk storage. They ought to be getting more for their money." Target application areas include virtual server, virtual desktop (VDI), database and cloud environments.

The competition points against disk drive arrays are high performance, better power efficiency and space efficiency and a reduction in accessing servers in some instances such as database use.

The competition arguments Pure Storage makes against other flash arrays are that they are capacity-limited, 1 to 2TB appliances and lack enterprise-class data reliability and protection features.

Dietzen talks about a 5TB version of the product serving 5 physical servers and 1,000 virtual machines. The box can enable, he says, the virtualisation of mission-critical database applications.

Beta testers have been pleased. Matt Kesner, the CIO of Fenwick & West, said: "The FlashArray has reduced our data between 50 to 90 per cent on a variety of workloads, ranging from VMware virtual machines to Microsoft Exchange and SQL, as well as reduced our physical storage footprint far beyond our expectations.”

A fourth beta test phase is now underway with 25 customers.

Now Samsung has balanced its end-user flash product investments by funding Pure Storage, an obvious competitor to Violin Memory. A third or C-round of venture capital funding by Pure Storage has raised $30m, taking total funding to $55m. Samsung participated in the C-round, along with venture capitalists, and has become a strategic Pure Storage partner, providing it with NAND chips.

Samsung and Pure Storage are collaborating at an engineering level to optimise Pure Storage's Purity operating software with Samsung flash. They are also undertaking joint marketing initiatives, such as trade show presence.

Are we at a shift point?

Make no mistake, all-flash arrays for primary data are coming our way – that's El Reg's take, and it's not just us. Steve Duplessie, a senior analyst and founder of the Enterprise Strategy Group, said: “While logic dictates that it's only a matter of time before solid state technologies replace spinning disks – certainly for all active workloads – the major gating factor on adoption is for someone to crack the economic code. If a hefty price premium doesn’t have to be justified, then the change to solid state storage can really start."

The Pure Storage FlashArray FA-300 series is available immediately for evaluation and should be generally available by the end of the year. Its cost will be in the $5 to $10/GB range, under $5/GB in instances of 5:1 data reduction. This is less than disk arrays configured for high availability and RAID, which can cost, Dietzen says, $10-$30/GB.

He says that other all-flash storage products cost $40 to $100/GB and that Pure Storage technology enables a price level at which all-flash technology can take on and beat enterprise disk drive arrays, other all-flash appliances and hybrid flash/disk arrays.

And no, the tiny fine print in search results doesn't cut it
Personal Tech30 Sep 2022 |