Our man plugs in and gives it a spin

I encountered various minor but annoying glitches with the website such as having to futz around to get the latest data shown.

When I managed to knock my hub offline (twice, due to my bad network cable, not the hub's fault) it was very very hard work getting the devices such as the meter and the smart plug seen again.

In particular there was no warning at all in the new "Smart Dashboard" mode (or by email or SMS) that my hub was disconnected, which would have saved much headscratching; the "Classic" view was more forthcoming.

This was compounded by inaccurate or apparent complete lack of instructions for resetting some devices (eg, the IHD: In-Home Display); I had to guess.

I get poorer connectivity, especially to meter clamp, than I experienced with the Efergy/Npower devices, and my house is quite small. 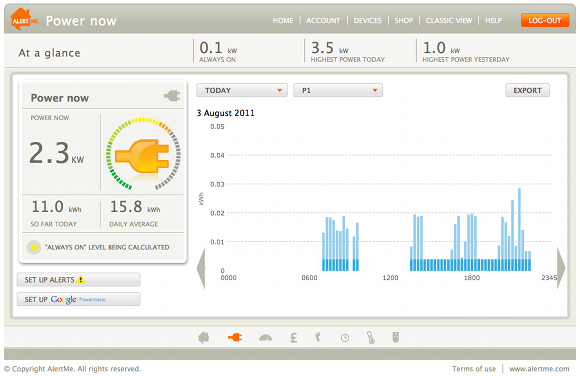 "Power Now" screen for TV/cable use measured by Smart Plug "P1". The dark blue bottom of the bars is "always on" (about 16W).

The AlertMe "Power Now" screen still invites you to "SET UP Google PowerMeter", but as PowerMeter is being shut down in mid-September and doesn't allow sign-ups, this should probably be ditched.

Alerting can be set on various parameters but the mechanism seems a little dumb:

The web pages show messed-up or oversimplified numbers from a techie point of view; nowhere on any of the power charts can I find out how to get plain sciencey 'Watts' on the vertical axis, the nearest being kWh (which is actually per 15 minutes, so kWh/4), else I have to go back via pence and the place-holder p/kWh number I put in! The exported numbers in CSVs are better, though not well labelled and with a glitch that eats the first line of data! 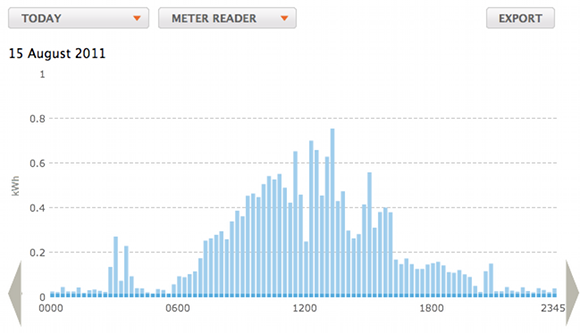 "Power Now" graph for whole house measured by clamp meter. The small lump starting at 3am is the dishwasher; the big lump from about 6am to 8pm is mainly solar PV generation; and the up-ticks visible either side of midnight are from the fridge compressor. Minimum/background house load is about 60W, ie, about 1.5 units per day.

The web's auto-logout time is too short for intermittent access to check a number here or there: maybe AlertMe should adopt a hybrid scheme such as that used by LinkedIn or the Simple Machines Forum which requires a recent login to do anything sensitive such as change settings, but lets you read stuff and flick between views indefinitely.

A real plus for my inner geek is the automatic capture and retention of the data so that I can easily analyse and graph it. On this point AlertMe beats the other two clip-on meters hands down. Even better, AlterMe doesn't assume that I'm running a Windows machine; downloads are plain CSV files.

Data retention by the system seems to be robust. Even removing/deleting, resetting and re-adding devices does not seem to lose historical data, and the data can be exported as CSV (albeit with the first line messed up).

The portable display (IHD: In-Home Display) has a decent clear colour display, and can survive not plugged into the mains for about five hours, so enough to be portable in practice while keeping an eye on consumption around the house, turning things on and off experimentally.

It would be even better to show a graph of recent history – eg, a 30-minute histogram – to help with understanding what consumes what without having to pay sole attention to the display – for example while looking after small children or cooking.

Being able to monitor house circuits individually would be useful, but is beyond the scope of the current AlertMe technology.

Being able to cope with microgeneration properly would make this a much more useful gadget for me, and I'm hoping to test AlertMe's solution soon.

If AlertMe's improved measuring system is calibrated properly and could be interfaced to electricity retailers' systems, then it could result in much more accurate estimated bills and fewer meter-read visits, which is good all round. It would be part of smart metering in fact ...

A nice piece of kit that could grace any Reg reader's digs, but especially for the non-techies AlertMe must make the instructions better and the web interface a little less flaky, and create the option to provide email or SMS alerts if something important goes offline, such as the hub or clamp meter. ®