iGamer “For fuck's sake, Mum. I asked for the appBlaster; not the fucking appWheel. You've totally fucked Christmas. No wonder dad's shacked up with that 26-year-old stunner. I fucking hate you!”

I can picture it now. Christmas morning 2011 – surly, ungrateful teenager versus distraught, nonplussed mum. Not that I've even tried the appBlaster, but a cursory glance at manufacturer apptoyz' website, and it appears the more promising of its two iOS gaming peripherals.

I've never had much truck with gyroscopic controls for iOS first-person shooters – extending both arms out and moving around real space looks and feels weird. But I imagine circling around my living room - I don't do this sort of thing in public, you understand - with the iPhone seated as an iron sight could actually enhance the experience. 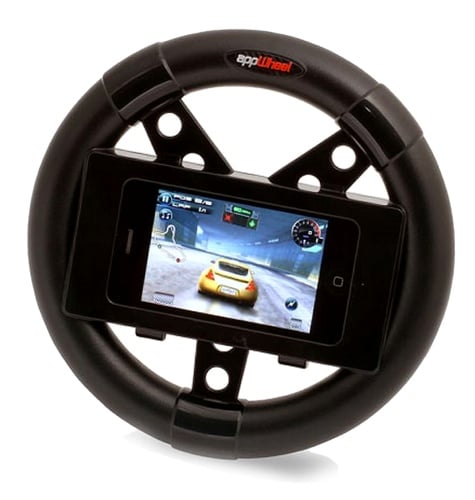 The appBlaster also implements a nifty physical double-triggers-to-touchscreen function, which might do the trick for those FPSs with adjustable button schemes, such as N.O.V.A 2.

Anyway, like the surly teenager, I've been handed an appWheel instead. Essentially a Wii Mario Kart wheel for iPhones and iPod Touches, it's a chunk of plastic slightly larger than your average saucer that bolts around your device.

It's a unpowered dummy peripheral, meaning there's no device interface whatsoever. According to the manufacturer, the appWheel simply "utilises the [device's] accelerometer of gyrometer to give enhanced virtual reality game play!". 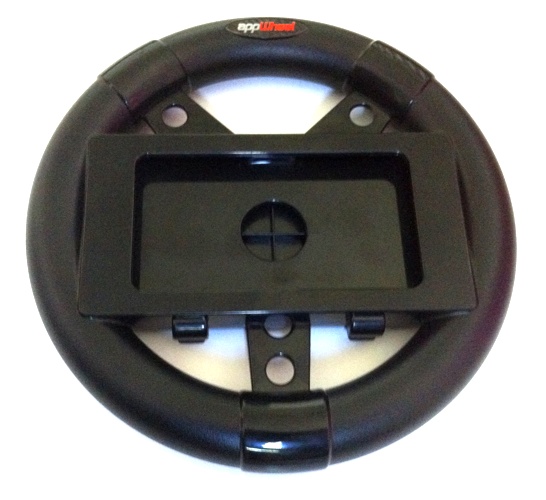 Of course, the mere mention of "enhanced virtual reality gameplay" should evoke irrevocable distrust in any self-respecting gamer. With the device's accelerometer and gyrometer providing the handling, and its vibrate function providing the feedback, there's absolutely nothing left for the appWheel to enhance.

Structurally, there's little to complain about. It's as sturdy as you'd expect for a tenner's worth of moulded plastic. The housing cover at the back is easy to remove and devices sit snugly into the unit courtesy of two bundled caddies – one for iPhone 3GSs and iPhone 4s, and a separate one for fourth-gen Touches. Device movement is negligible, and only apparent when shaking the wheel vigorously. And the textured plastic on the wheel and housing cover provide decent enough grip. 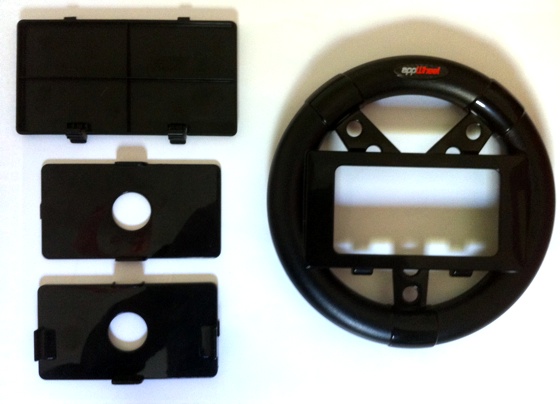 Which brings me nicely onto my critical point. You'll be gripping that housing cover a lot, as there's no way of curling your fingers around the steering wheel like... well, like a steering wheel.

The appWheel is as small as possible to ensure you can reach the touchscreen – vital for controlling the accelerator and brake in racing games. You might just curl your fingers through the gap at the bottom of the wheel and drive as casually as my fiancée does at 90mph on the motorway, but you'll then need to use your other hand for the touchscreen controls, which proves extremely awkward. 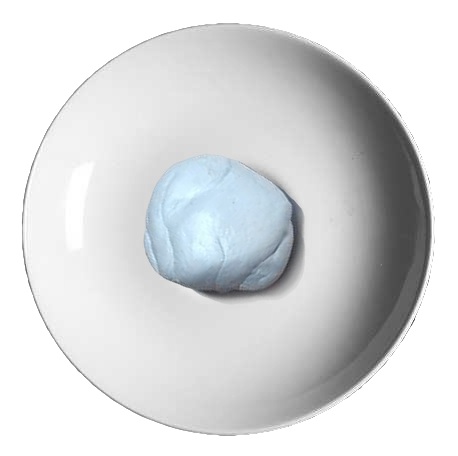 So the appWheel doesn't feel much like a steering wheel. It's no more comfortable than holding your actual device - at least not for the short periods people tend to play iOS games. And, contrary to the manufacturer's claims, it does not enhance "virtual reality gameplay".

So what does the appWheel actually do for racing games? Well, nothing that some blu-tack and a saucer won't do for a whole lot less money. ®

Thanks to Red5 for the loan of the review sample.

iGamer covers the best - and sometimes, ahem, the worst - in mobile gaming, from Android to iPad, every other Wednesday. If you think there's a great game we really should cover, please let us know.