CERN: 'Climate models will need to be substantially revised'

CERN's 8,000 scientists may not be able to find the hypothetical Higgs boson, but they have made an important contribution to climate physics, prompting climate models to be revised.

The first results from the lab's CLOUD ("Cosmics Leaving OUtdoor Droplets") experiment published in Nature today confirm that cosmic rays spur the formation of clouds through ion-induced nucleation. Current thinking posits that half of the Earth's clouds are formed through nucleation. The paper is entitled Role of sulphuric acid, ammonia and galactic cosmic rays in atmospheric aerosol nucleation.

This has significant implications for climate science because water vapour and clouds play a large role in determining global temperatures. Tiny changes in overall cloud cover can result in relatively large temperature changes.

Unsurprisingly, it's a politically sensitive topic, as it provides support for a "heliocentric" rather than "anthropogenic" approach to climate change: the sun plays a large role in modulating the quantity of cosmic rays reaching the upper atmosphere of the Earth.

CERN's director-general Rolf-Dieter Heuer warned his scientists "to present the results clearly but not interpret them". Readers can judge whether CLOUD's lead physicist Jasper Kirkby has followed his boss's warning.

"Ion-induced nucleation will manifest itself as a steady production of new particles that is difficult to isolate in atmospheric observations because of other sources of variability but is nevertheless taking place and could be quite large when averaged globally over the troposphere."

Kirkby is quoted in the accompanying CERN press release:

"We've found that cosmic rays significantly enhance the formation of aerosol particles in the mid troposphere and above. These aerosols can eventually grow into the seeds for clouds. However, we've found that the vapours previously thought to account for all aerosol formation in the lower atmosphere can only account for a small fraction of the observations – even with the enhancement of cosmic rays."

The team used the Proton Synchotron accelerator (pictured here with Kirkby) to examine the nucleation using combinations of trace gasses at various temperatures, with precision. These first results confirm that cosmic rays increase the formation of cloud-nuclei by a factor of 10 in the troposphere, but additional trace gasses are needed nearer the surface. 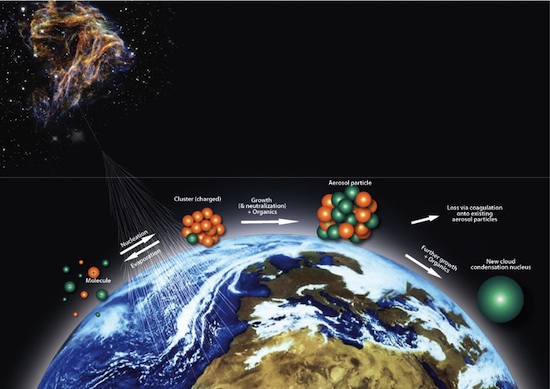 Climate models will have to be revised, confirms CERN in supporting literature (pdf):

"[I]t is clear that the treatment of aerosol formation in climate models will need to be substantially revised, since all models assume that nucleation is caused by these vapours [sulphuric acid and ammonia] and water alone.

The work involves over 60 scientists in 17 countries.

Veteran science editor Nigel Calder, who brought the theory to wide public attention with the book The Chilling Stars, co-authored with the father of the theory Henrik Svensmark, has an explanation and background on his blog, here, and offers possible reasons on why the research, mooted in the late 1990s, has taken so long.

Svensmark, who is no longer involved with the CERN experiment, says he believes the solar-cosmic ray factor is just one of four factors in climate. The other three are: volcanoes, a "regime shift" that took place in 1977, and residual anthropogenic components.

When Dr Kirkby first described the theory in 1998, he suggested cosmic rays "will probably be able to account for somewhere between a half and the whole of the increase in the Earth's temperature that we have seen in the last century."

More from CERN here, and a video here.®