Comedian Nick Helm has secured the Funniest Joke of the Fringe 2011 title, after entertaining the Edinburgh crowds with this rib-tickler: "I needed a password with eight characters so I picked Snow White and the Seven Dwarves."* 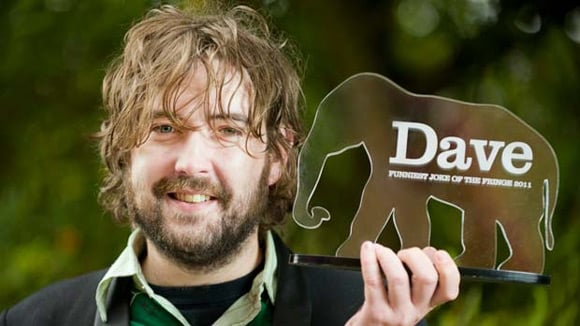 A triumphant Helm (pictured) said of his Dave TV honour: "I knew my joke was the funniest joke of all the other jokes in 2011. Thank you to Dave and all the people that voted for proving me right."

Tim Vine, who last year took top spot with "I've just been on a once-in-a-lifetime holiday. I'll tell you what, never again", was back on the podium to collect the runner-up gong for the splendid: "Crime in multi-storey car parks. That is wrong on so many different levels."

The worst joke of the year went to a deserving Paul Daniels. The veteran magician took the wooden spoon for explaining to the audience of his Hair Today, Gone Tomorrow show: "I said to a fella 'is there a B&Q in Henley?' He said 'No, there's an H, an E, an N an L and a Y...'"

Tim Vine also got a nod in the worst joke round-up for "Uncle Ben has died. No more Mr Rice Guy", while Andrew Bird is doubtless now regretting he ever told the Fringe: "My wife's eating for two. She's not pregnant, just schizophrenic." ®

*As far as we're aware, it's Snow White and the Seven Dwarfs. Apparently Tolkein is to blame for this "dwarves" business.