A newborn, nearby supernova with the potential to significantly improve our knowledge of the universe has been discovered by a supercomputer, two telescopes on opposite sides of the world, a sharp-eyed astronomer, and his helpful Oxford colleague.

The Reg spoke with Peter Nugent, the California astronomer who first spotted the supernova, and who is a senior staff scientist at Lawrence Berkeley Lab and an adjunct professor of astronomy at the University of California, Berkeley.

Nugent explained that images of the exploding star were captured by the Palomar Transient Factory (PTF) survey, using the 48-inch Samuel Oschin Telescope in Palomar Mountain, California. PTF scans the sky nightly, and sends its data to the National Energy Research Scientific Computing Center (NERSC) in Berkeley for analysis.

Sifting through that data to uncover such nuggets as the new supernova now known rather prosaically as PTF 11kly requires the combined efforts of man and beast – the beast in this case being NERSC's Carver IBM iDataPlex system.

Carver is the junior partner in NERSC's supercomputer team, with 400 compute nodes, each with two Nehalem quad-cores. When all 3,200 cores are up and running, Carver has a theoretical peak performance of 34 teraflops per second. NERSC also houses Franklin, a massively parallel Cray XT4 with 38,128 Opteron compute cores that, at 352 Tflop/sec, puts out over ten times Carver's peak flops.

The big girl on NERSC's team, Hopper, is far and away more powerful still: it's a Cray XE6 with 153,216 compute cores that came in fifth in November 2010's Top500 List, with a sustained performance of 1.05 petaflops/sec. 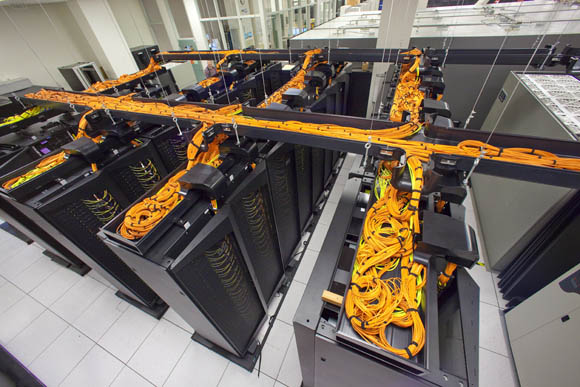 Although Nugent and his team also use Hopper when the need arises, Carver was the machine of the moment during the run that discovered PTF 11kly – and very little of Carver was involved, to boot. A typical daily PTF workload uses about 60 of Carver's cores, but "The night we were doing it," Nugent told us, "we were trying to catch up, so we were on about 120 cores throughout the night.

"That's the nice thing about NERSC having all these cores available," he said. "We could just increase the load with just one change in one line in a piece of code and, boom, it just goes off and grabs more processors."

The method that the PTF projects uses to track down supernovae is straightforward, if maddeningly detailed. Images taken by the Samuel Oschin Telescope are compared with enhanced images taken at the beginning of the survey – if there are differences, they're flagged and logged in a database.

That may sound simple, but as Nugent explains, "There are lots of artifacts on the images, and of course there'll be some new things – there'll be asteroids, there'll be variable stars, and occasionally there'll be a supernova."

When Nugent says "a lot" of artifacts, he's not exaggerating. "Every night we typically get about one million candidates that pass some sort of threshold, and of those, only about a few hundred are actually real, and of those few hundred, only about two are interesting new supernova."

The PTF project has discovered over one thousand supernovae since it started up in 2008, but PTF 11kly is not simply another interesting new supernova, it's an exceptionally valuable source of scientific data.

Next page: Not just any supernova...
Page: