Not just any supernova...

First, it's a Type 1a supernova, especially interesting to astronomers because these supernovae were used in the 1990's to determine that the expansion of the universe is accelerating, and are used in the search for dark matter. Unfortunately, more needs to be learned about Type 1a supernovae before they can be used to help better understand accelerating universal expansion and dark matter, and PTF 11kly should provide excellent data.

Type 1a supernovae are believed to be the death throes of white dwarves, stars with masses of about 1.4 times that of our sun. As Nugent explains the supernova process, the white dwarf is "accreting material from its companion, and when it gets massive enough, the temperatures on the inside can ignite the carbon in a runaway thermonuclear explosion."

Images taken of PTF 11kly's location by the Hubble Space Telescope in 2002 show what appear to be two red giants in the vicinity. If that's indeed what Hubble's pixels picture, that'd fit well into the accretion scenario that Nugent paints – one or both of those giants could have provided the meal that led to PTF 11kly's explosion.

This type of supernova is unique. "We know that these [white dwarves] are pretty old stars," Nugent says, "because we see them in both young galaxies and old galaxies, and all the other types of supernovae we only see in very young galaxies."

Another huge reason that PTF 11kly is such great candidate for study is that it's exploding almost next door – only around 21 million light-years away in the Pinwheel Galaxy, more properly known as M101, which can be found in the Big Dipper, more properly known as Ursa Major. It's the closest supernova of its type discovered since 1986 – and that one, Nugent says, was obscured by dust. "Before that, you'd have to go back to 1972, 1937, and 1572 to find more nearby Type 1a supernovae."

Finally, PTF 11kly was discovered mere hours after it first exploded – well, a few hours plus 21 million years, but let's not quibble.

The baby supernova was picked out of the reams of PTF data by a combination of computer power and human intelligence. The filtering process that Carver uses to trim those one million anomalies down to a few hundred was developed by Josh Bloom, an associate professor of astronomy at the University of California, Berkeley.

To develop the machine-learning algorithm that he created, a large group of experts went through prefiltered anomaly data, and classified each anomaly as to whether it was of interest or not. Bloom then took those observations and developed what Nugent calls a "boosted decision tree" to filter and categorize the millions of nightly anomalies into a manageable number of reasonable possibilities.

After each pass through the PTF data, those few hundred possibilities are distributed to a group of "citizen scientist" supernova seekers – yes, actual humans – known as the Galaxy Zoo team (which describes itself as "very small and very busy"), who eyeball the possibilities to attempt to discover actual supernovae, along with a bot that Bloom developed that also roams through the data.

Nugent is one of those final filterers – and he was lucky enough to be in the right place at the right time. "Wednesday at noon, California time, was when I looked and said, 'Okay, database, tell me what the best one we have from last night is', and – boom – it was there," he said. And it hadn't been there in the previous night's readings. 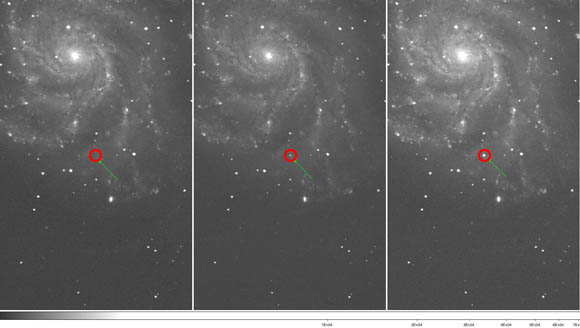 "At first I was completely skeptical. I thought it was an asteroid passing in front of the galaxy, but then I searched the asteroid database and, nope, there was nothing there. Then because it was so faint, I said 'Well, this could be a nova' – which is another type of outburst, but not as interesting to us. And, no, that wasn't quite right."

Nugent then took advantage of a computer far less powerful than Carver. "Fortunately, I happened to be online and chatting with Mark Sullivan in England, and he said, 'Well, the sun is setting in the Canary Islands right now. We can have them take a spectrum of this object and let us know.' And so that happened three hours after I found it – they took a spectrum, and confirmed it was a supernova."

And not just any supernova, but "a very young, Type 1a supernova" as identified by the strong silicon lines that the Liverpool Telescope on the Canary island of LaPalma, Spain, identified in its spectrum.

After the Liverpool Telescope's confirmation, Sullivan emailed that team about its quick response: "Wow, what fun! From an email alert to data in <1 hour."

That "fun" is now being shared worldwide, thanks to the PTF network. Within 12 hours, PTF 11kly's Type 1a designation had been confirmed by California's Lick Observatory and Hawaii's powerful Keck Observatory, and many more telescopes around the world are making observations and gathering data. Thanks to an urgent request to NASA, the Hubble will take a look this weekend, as well.

"When you catch them this early, mixed in with the explosion you can actually see unburned bits from star that exploded!" effused Andrew Howell of UC Santa Barbara, exemplifying the excitement of astronomers worldwide. "Despite looking at thousands of supernovae, I've never seen anything like this before," he said.

It's possible that you may not even need a telescope to see PTF 11kly. "The best time to see this exploding star will be just after evening twilight in the Northern hemisphere in a week or so," says Sullivan. "You'll need dark skies and a good pair of binoculars, although a small telescope would be even better."

Just look for the Big Dipper and track down that Pinwheel with the help of Stargazers Lounge. And if you still can't find it, you might ask your friendly neighborhood supercomputer for assistance. ®

Something to consider if you splash out on Samsung's new hotness