VMworld VMware envisions a world where applications can roam across one big intercloud. Apps won't just jump from internal data centers to public cloud services, the company believes. They'll move from cloud to cloud like phone calls across cell networks.

That's why VMware is keen on getting its vSphere server virtualization not only in the corporate data center, but out there on the service providers who want to be the next Amazon EC2. Then VMware can own the corporate cloud computing on both sides of the firewall.

At the VMworld virtualization and cloud shindig in Las Vegas today, VMware made a number of tweaks to the vCloud cloud fabric software that it wants to become the uber-operating system of corporate computing.

Matthew Lodge, senior director of cloud services, says that VMware is off to a good start, with more than 5,600 service providers in 62 countries participating in its service provider program. Many of these companies started out just hosting server images atop VMware hypervisors, but an increasing number of them are looking to convert to full-on public clouds with utility-based pricing, and they're looking forward to being backup or extra capacity for internal workloads running in the data center.

Before that can happen, service providers have to make sure that they are offering absolutely compatible infrastructure as a service (IaaS) clouds. So at last year's VMworld extravaganza, the company rolled out its vCloud Director, a cloud fabric controller to underpin infrastructure clouds. In addition, the company announced two levels of cloud compatibility that service providers would certify to, one being vCloud Powered and the other being vCloud Datacenter.

The former is a more general level of certification, while the latter ensures absolute compatibility between vCloud-based infrastructure clouds - so much so that using vCloud Connector, a tool announced in February, a company could move a job not only from their private cloud to a public cloud run by a certified service provider, but roam across the public clouds with the certification.

You might think that VMware could have done this easy enough by spending some of its wad of cash building its own data centers and actually create a VMware-based alternative to EC2. But then VMware would be setting itself up against the service provider community instead of leveraging it against Amazon and its EC2. "VMware didn't build its own cloud because partners could do it faster and more broadly," Lodge tells El Reg. "We're pretty impressed by what partners have been able to do in a short time."

Lodge says that VMware has 41 service provider partners certified as vCloud Powered, with more than 20 of them coming in the past three weeks ahead of the VMworld event. The plan is to have more than 100 by the end of the year. And for the higher vCloud Datacenter certification, Lodge says that the plan is to have 25 data centers with the certification operating in 13 countries by the end of 2011. Verizon/Terremark, SingTel, Bluelock, Colt, CSC, and SoftBank are in this program, and starting today, Dell's services unit has announced its intent to build a vSphere-based cloud and get the vCloud Datacenter certification for clouds it will operate in North America, Europe, and Asia. 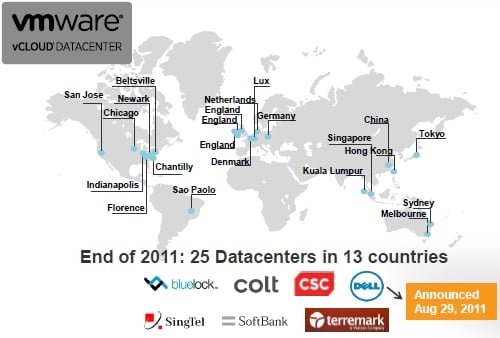 To help improve the portability of workloads running on vCloud Datacenter certified clouds, VMware and its partners have cooked up Global Connect, which is an optional feature of a vCloud Datacenter service that is constituted in bilateral agreements between the service providers that allows for VMs to roam across the clouds.

Just like with cell phones, you negotiate one contract and when you need to use a different network, you just make the call. To make this possible, VMware has worked with the service providers to come up with catalog synchronization workflows for its vCenter Orchestrator, an add-on for its vCenter management console that allows admins to create policies that control how VMs are allocated and moved around a network of virtualized servers.

The Global Connect program will also allow a company that has global operations and that may need to store data and do processing on it within a particular country for legal reasons or that wants to get processing closer to end users regardless of the law to have a single, global contract from one supplier, which in turn subcontracts the cloudy infrastructure from a provider in those countries that are part of the vCloud Datacenter program.

In addition to the vCloud certification and Global Connect program, VMware has gone back to the drawing board and completely revamped its vCloud Connector, a plug-in for its vCenter console that was announced in February and that allows admins to manage VMs running on internal and external clouds - and move them between the two - from a single pane of glass.

According to Lodge, vCloud Connector 1.5 has a completely new agent-based architecture, which allows for the connector to move workloads faster because it can do many transfers back and forth across the firewall in parallel. The updated vCloud Connector also does checkpointing on the VMs being moved to make sure they are not corrupted. And perhaps more importantly, while vCloud Connector 1.0 was a plug-in for the vCenter management console, vCloud Connector 1.5 is a free-standing, Web-based application that can be used from within Internet Explorer, Firefox, or Chrome browsers. (You can also still use it as a vCenter plug-in if you want, too.)

vCloud Connector 1.5 is available as a free download today and will be available for production use in the fourth quarter.

To help companies figure out who is selling vCloud services and to take them out for a spin, VMware is debuting a new gateway site called vcloud.vmware.com that includes the Web-based vCloud Connector and that allows end users to drill down through a global map to find vCloud service providers at both the Provider and Datacenter levels and actually upload VM images to these providers on a trial basis.

They are not just providing raw capacity. And, thanks to the storage-neutral, hypervisor-based replication at the heart of SRM 5.0, the service provider doesn't have to have the same storage as the customer for this all to work. "As long as it is all x64 servers, we don't care," says Lodge. ®