Green energy and jobs will cripple the UK economy

The UK's headlong rush into renewable energy – one ignored by the rest of the world – will hit British jobs and then general incomes, an economic study finds.

The report, The Myth of Green Jobs by economist Professor Gordon Hughes of Edinburgh University, examines the long-term impacts of subsidising expensive "green" renewable energy projects. It says that if the UK continues to do so, it will lose 2 to 3 per cent GDP a year for around 20 years. If reducing CO2 emissions is your goal, says Hughes, your economy really can't afford renewable energy.

How does he get to this figure?

He explains that one reason is that labour inputs are a cost, not a benefit. This is common sense: the goal for a productive economy is to have the highest value creation at the lowest cost. If your workforce is mostly employed doing the basics, such as cultivating manglewurzels, it is going to have fewer doctors, teachers or rocket scientists. North Korea is a good example. Or, for the same cost, you can have a cleaner environment.

"All forms of green energy tend to be substantially more expensive than conventional energy, so there is a trade-off between higher costs and lower emissions," writes Hughes. "This trade-off is not specific to green energy, since there are many ways of reducing emissions of greenhouse gases. Hence, the starting point of any assessment of such programmes should be the total cost per tonne of carbon dioxide saved – or its equivalent – which will be incurred by relying upon different measures or policies to reduce emissions."

Turning to job creation, Hughes points out that short-term gains will be cancelled out by medium- to long-term pain. Investing in renewables, the EU Commission claims, will create two million jobs, a figure not supported by any evidence.

But Hughes explains, higher costs don't just disappear from an economy – they must materialise somewhere.

"In terms of the labour market, the gains for a small number of actual or potential employees in businesses specialising in renewable energy has to be weighed against the dismal prospects for a much larger group of workers producing tradeable goods in the rest of the manufacturing sector."

Medium- and long-term costs of chucking money at "green" energy projects reduces the productive capacity and income levels of an economy. In addition, energy costs (for everyone) need to rise 100 per cent to subsidise the green energy. The strategy is predicated on "setting an example" to the world that other economies will follow. But other countries aren't following. This means costs rise for manufacturing and related sectors, with the likely results these will relocate, and be lost to the UK economy. 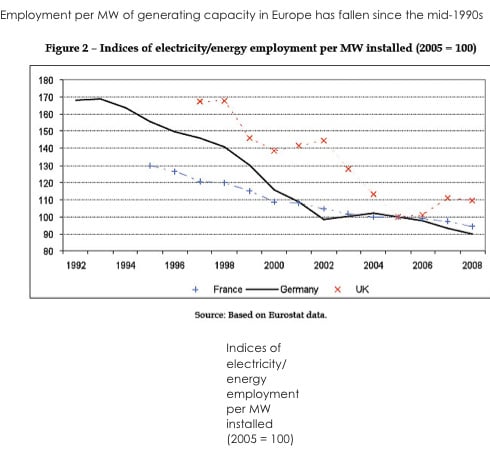 Some numbers, then. Meeting the EU's target of a 20 per cent reduction in greenhouse gas emissions by 2020 requires £120bn of investment at current prices, over the replacement of current capacity that will be taken offline. Opting for gas-fired plants would cost around £13bn. Over 2006 to 2009 total investment in energy utilities (plus water) averaged £7.6bn per year, while business put in $142bn per year. So one extra year's business investment (outside the electricity sector) is required to reach the target.

"Adding 200 per cent to historic levels of investment in the energy sector will create supply bottlenecks and demand-driven inflation for capital goods. Either the planned increase in capacity will not occur or it will prove to be much more expensive than the base costs suggest. Second, this amount will represent a diversion of more than 10 per cent of non-electricity business investment into renewable energy, unless there is a significant reduction in household or government consumption to finance an increase in total investment expenditure," writes Hughes.

Professor Hughes also points out something often overlooked. The Bank of England has a duty to keep inflation to 2 per cent a year. If energy costs are rocketing, it must pursue policies to deflate other parts of the economy.

No evidence suggests that renewables will become affordable. While we might expect renewable technologies to become more efficient, conventional energy (and nuclear) also improve in efficiency. And the current renewables are a long, long way behind – and so vastly more expensive.

"There is no general reason to assume that future technical progress and improvements in efficiency will favour renewable sources of energy over non-renewable sources... [and] no reason the UK can gain a comparative advantage in the manufacture of renewable energy equipment by any combination of policies that are both feasible and affordable," Hughes writes.

There's no way of escaping the fact that today's renewables are simply a vastly inferior technology, and this comes at a huge cost. An economy directed towards the creation of "Green Jobs" will look a lot like North Korea. Except perhaps the manglewurzels will be 100 per cent certified organic. ®

The Myth of Green Jobs (PDF/1.4MB) is available via The GWPF.