Don’t drop this on the floor

It’s not the first single-molecule nano-motor, but it’s the first one to be driven by electricity: a Tufts research team has demonstrated that you can “provide electricity to a single molecule and get it to do something that’s not just random” (as team leader Charles Sykes put it).

Previous single-molecule nano-motors have been driven either by light or by chemicals, the researchers say.

Driving the molecular motor isn’t trivially easy, though. To achieve what they wanted, the researchers had to use the metal tip of a low-temperature scanning tunneling electron microscope to provide the charge to a butyl methyl sulfide molecule placed on a copper surface. 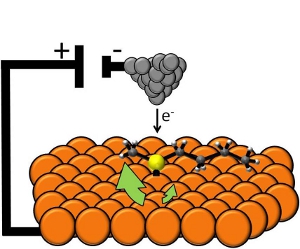 The scanning tunneling electron microscope can spin the molecule

Unsurprisingly, any practical application of the discovery is a long way away, but in the Tufts media release, Sykes imagined that it could be used to overcome the friction that takes place inside nano-tubes used (for example) in medical tests.

“At these small scales, friction of the fluid against the pipe walls increases, and covering the walls with motors may help drive the fluids along,” he said.

The researchers had to drop the temperatures down to 5 Kelvin, because at higher temperatures, the molecule spins too fast for measurement. Even at that temperature, the rotation ran at 50 per second. To prove that their observations weren’t just showing random behaviour, the group had to track every rotation, counting 5,000 rotations for “every single data point” in the experiment.

Future work will include getting a better understanding of the small-scale interactions taking place, and study how energy could be transferred to other molecules. ®