iGamer Gaming peripherals have a bad reputation, and not without good reason. From the sublime Steel Battalion controller to every ridiculous Wii peripheral, these plastic appendages have one thing in common: they make gamers look sublimely ridiculous. 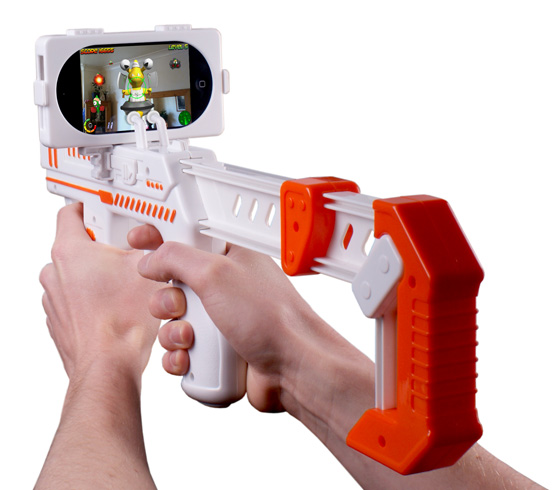 Even those which actually enhance gameplay - force feedback steering wheels, Guitar Hero's guitars and Samba di Amigo's maracas spring to mind – still manage to waft a stench of puerility over a pastime already much derided as an infantile pursuit.

The appBlaster is no exception. Quite simply, any post-pubescent gamer is going to look like a right tool moving around their living room brandishing a plastic gun. Get beyond this, though, and you'll discover that while the appBlaster is itself far from revolutionary, it may just be the inadvertent harbinger of a revolution in FPS gaming.

OK, so how do I get from a moulded plastic toy gun onto which you clamp your iPhone or iPod Touch to a revolution in FPS gaming? Well, like any technological advancement, iteratively of course.

The gyroscopes and accelerometers in smartphones and tablets already allow for 1:1 head tracking – games like Rage and NOVA 2 proving their accuracy for looking around 3D environments. Yet holding out your device and straining to press touchscreen controls whilst turning through 360 degrees feels contrived. 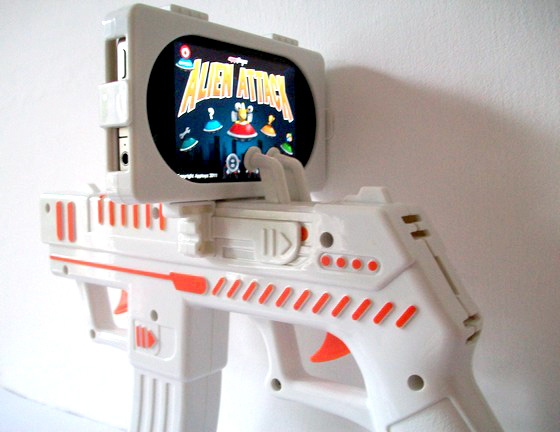 By clamping an iDevice on the top one of man's deadliest ergonomic designs, the appBlaster simply places the viewpoint in a natural position, in this case, aiming down the barrel of a gun. Better still, the appBlaster employs two triggers – one by the grip and one by the magazine – to independently control prodders and thus mimic finger taps on touchscreen controls.

3D environments require another vital control element, of course, that of movement. And it's here the appBlaster understandably fails. It's perfect for duck shoots like the simple but fun Augmented Reality game Alien Attack!!! – free to download from iTunes – in which you shoot down incoming waves of aliens, but it can't control movement in full first-person games. So while NOVA 2's control scheme, for example, can be customised to relocate its trigger points under the appBlaster's prodders, you'll need to revert to touchscreen controls to move around, which proves highly impractical.

If you're reading appToyz – or indeed anyone interested in developing a multi-million selling peripheral – all that's required to realise the appBlaster's potential and turn it from mildly entertaining toy into revolutionary control scheme is a Bluetooth thumbstick and triggers, and perhaps the odd additional button or two. I'd even go so far as to suggest you place the thumbstick behind the magazine, in easy and comfortable reach to the secondary-fire trigger. 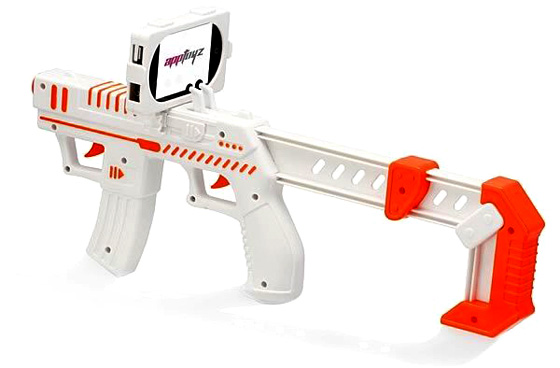 Room for improvement – even a revolution in gaming

It would be easier on Android phones and tablets, naturally. Thanks to Google's open Bluetooth policy, PS3 controllers have already been fully paired with devices to control emulator and homebrew games. But with enough support from the big developers, you might just even convince Apple to reconsider it's closed-shop approach.

By bringing ergonomics to bear on the iDevices' own spatial technology, the appBlaster is one of those rare gaming peripherals that actually enhances gameplay. It's also something of a missed opportunity, however. With no way of controlling movement, your feet are stuck firmly on the firing range. And without Bluetooth mods to put a revolutionary controller in your hands, I'm afraid to say, when Rambo-ing around your living room with a fake, plastic gun, you're still going to look like a right tool. ®

Thanks to Red5 for the loan of the review sample.

iGamer covers the latest in mobile gaming, from Android to iPad, every other Wednesday. If you think there's a great game we really should cover, please let us know.

appWheels and Wii golf clubs are no match for a good blaster at your side, Kid.
Price: £20 RRP