Phones4u has managed to offend Christians with a cartoon Jesus offering a thumbs up, apparently endorsing its range of Samsung handsets rather than the more-traditionally messianic iPhone.

The advert drew 98 complaints, more than enough to trigger an investigation into the ad which appeared in the national press just before Easter, though the focus of the complaint on the depiction of the Sacred Heart would indicate a Catholic persuasion among those whose hackles were raised – Anglicans are perhaps harder to annoy. 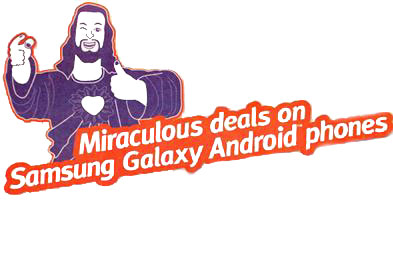 Phones4u said it was very sorry, and had intended the image to be "a light-hearted, positive and contemporary image of Christianity relevant to the Easter weekend", but it seems a winking Christ giving a thumbs-up is more offensive than depictions of a man nailed to a cross.

The Advertising Standards Authority decided that the image "gave the impression that [Phones4u] were mocking and belittling core Christian beliefs" and was "likely to cause serious offence, particularly to Christians", and was thus in breach of the rules.

Not that Phones4u has to pay a fine or anything, and the ASA can only ask the company not to use the image again. Given that the adverts ran six months ago and had already been taken down, it's more a matter of principle than a proper slapping. Depictions of Allah aren't allowed, as any depiction can offend Muslims, depictions of Jesus are generally OK as long as he's not winking, holding a heart, or endorsing any mobile phone that didn't come from Apple. ®

Silent Bob's fans might notice that Phones4u may have RippedKevOff. The Galaxy Jesus looks remarkably like Buddy Christ from Smith's movie Dogma, where he is part of the "Catholicism Wow!" campaign to jazz up the image of the Catholic Church.