The day after Seagate launched its 4TB external drive, Hitachi GST did exactly the same with its launch of its 4TB desktop whopper.

It gets curiouser in a PR/marketing sense as Hitachi GST announced it had a terabyte-per-platter product the day before Seagate revealed its 4TB product. Oddly Hitachi only announced a single-platter version of the technology, storing up to 1TB, when it clearly had the capability to deliver a 4TB product. Did it want to top and tail Seagate's announcement?

Now Hitachi has announced its 4TB product, in the shape of a twin-drive, 8TB, G-RAID Thunderbolt external storage product specifically for the Mac market. There will also be a 4TB G-DRIVE product. The drives inside are 4TB ones spinning at 7,200rpm, and the Thunderbolt interface enables data transfer at up to 10Gbit/s. The available interfaces are eSATA, FireWire 400 and 800, USB 2.0, but not USB 3.0, and Thunderbolt. 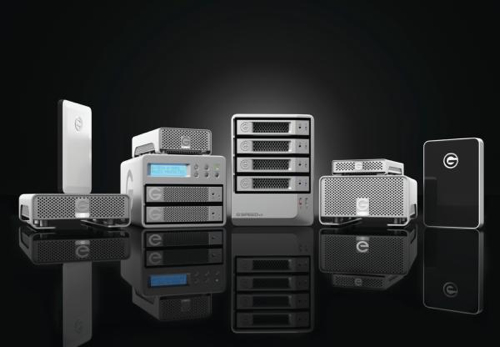 The company says it does not use the 1TB/platter technology, so there must be an unannounced Hitachi GST 4TB hard disk drive inside, presumably a Deskstar 7K4000, which could use 5 platters each storing 800GB. There's nothing on the Hitachi GST website about such a drive though.

The drives are mounted inside an aluminium enclosure with a quiet fan inside. It looks like a single drive to Mac OS X and can be reformatted to support Windows.

To excite video editing professionals further, the company says every terabyte can hold:

The G-DRIVE and G-RAID products are on demo at IBC 2011 (Stand #7.D12a) in Amsterdam from today until 13 September. Pricing was not announced. ®

Google sells 'predictable' storage costs: $120k for a year before you get a foot in the door, though

Get the forecast right and you'll get a, er, discount