Review The lack of any direct storage expansion in Apple's iOS products has been one of the more enduring causes of complaint for those using or pondering on owning one of these devices. Kingston Technology demonstrated its idea of a workaround when it previewed the MobiSX at CES at the beginning of the year. Now in production, with a name change to boot, the Kingston Wi-Drive relies on wireless data transfer to deliver its 16GB or 32GB iOS storage expansion. 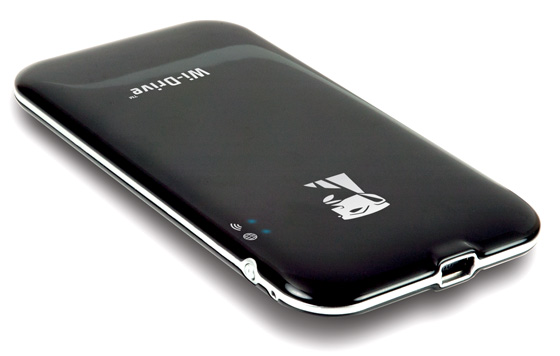 Looking every bit like a black iPhone 3G without a screen, the Wi-Drive has just one mini USB port for data transfer from a computer, that also serves to charge the device. You get a cable in the box, but no PSU. A small illuminating button on the side lights green when on and charged, changing colour to red as the battery fades. On the front, tiny blue LEDs adjacent to wireless and network icons start to flicker when establishing communication and a greenish one in the centre flashes to indicates data access activity.

First things first though. You need to download the Kingston Wi-Drive app to get anywhere when linking to this wireless flash drive. After installation, the iOS device needs to locate the Wi-Drive in the Settings > Wi-Fi listing, and connect as you would any access point. By this time you’ll have gathered that your Internet access is buggered now, but there is a workaround, more on that in a moment. For now, let’s stick with the easy option.

For a start, unless you’ve previously hooked up the Wi-Drive to a computer with USB and created folders and copied content, you’re not going to have a very productive time linking the drive wirelessly. Assuming it’s already bulging with media, when fired up, the Wi-Drive app’s home screen simply shows a drive icon and the IP address. Tap on it and your files and folders will show up.

To make things easier, the Wi-Drive app user interface has shortcut icons for photos, video and music bookended by the Home and Settings options. These shortcuts aren’t that great though. Photos are listed by name, rather than showing a thumbnail. However, if you click on one, the image shows and there’s a tile icon that, if prodded, will reveal thumbnails. So that’s OK, it’ll even run a slideshow for you. 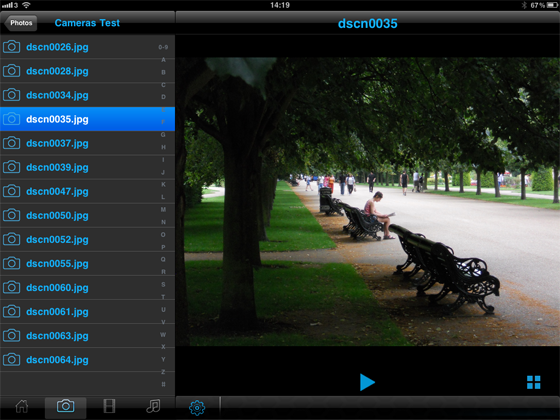 Picture viewing was trouble-free, but lacks an option to change image orientation

The music files are a similar sprawl of filenames and there's alphabetical labelling on the side that should help to jump to certain titles. But if most of your music files are prefixed by numbers, then this option doesn't help. Moreover, the video listing will only show the file format that the Wi-Drive supports. Yes indeed, the device relies on its own media player to show content which, when its own ‘All Video’ listing is used, filters out AVI, MKV and WMV formats, to name a few.

Next page: Playing around
Page: