The recent release of Apollo landing sites snaps, captured by NASA's Lunar Reconnaissance Orbiter (LRO), was a serious kick in the 'nads for the black helicopter brigade and their tiresome insistence that the good old US of A faked the Moon landings.

American astronauts did indeed walk on the lunar surface, and that would seem to be an end to the matter.

Well, it would be if we at El Reg had not received sensational proof of a massive cover-up reaching to very highest echelons of the US administration and fast food industry.

Consider if you will the LRO image of the Apollo 17 site: 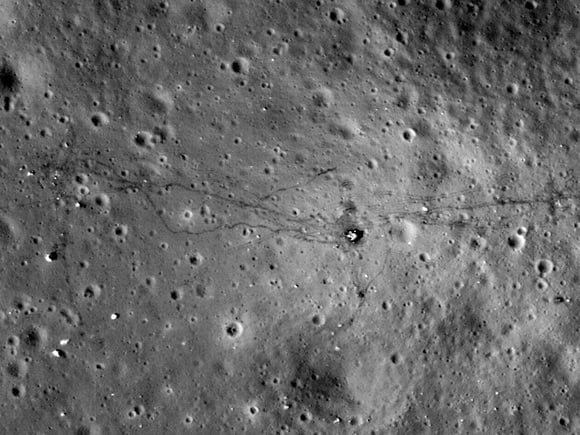 Yup, just what you'd expect to see, but what's significant here is not what is clearly present, but what is missing. According to our Pentagon source (known to us only as "Sore Throat"), NASA image manipulation experts have spent the last two weeks painstakingly removing evidence of an early 1960s operation so secret that the CIA had president Kennedy assassinated when he inadvertently overheard two spooks discussing it in a White House toilet.

We can now sensationally reveal that when commander Eugene Cernan and lunar module pilot Harrison Schmitt landed on the Moon on 11 December 1972, this is what they were looking for: 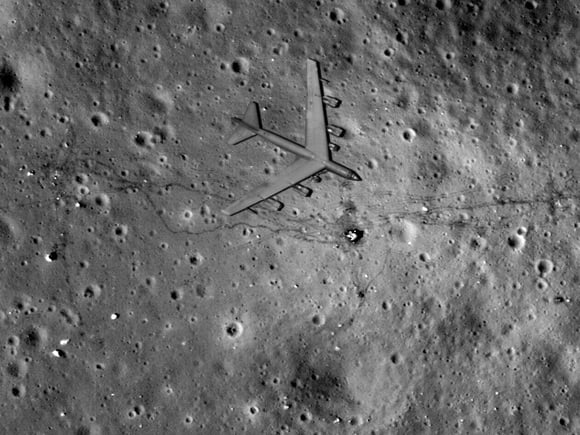 The B-52 in question crash-landed while carrying advance supplies for "Operation Stonebaked", a cunning plan to open a lunar pizza franchise, launched amid fears that the Soviet Union might be moving rapidly towards a boiled potato and vodka kiosk in the Sea of Tranquility, thereby causing an immediate extraterrestrial fast food gap which the United States would be hard pushed to close.

Next page: Optimus Prime, or it didn't happen!
Page: