Ten years after the Twin Towers: What's the Reg angle? 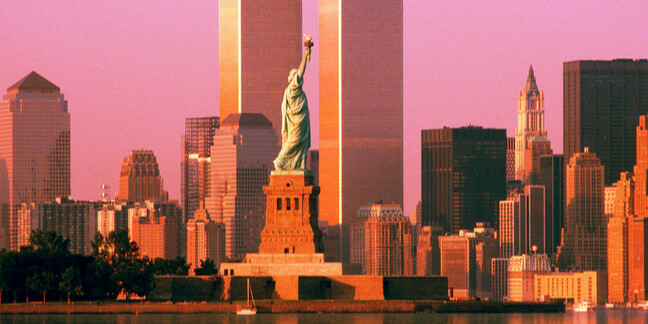 In one of the first stories The Reg posted following the attack on September 11, 2001, then-reporter Kieren McCarthy said the internet had faced its first real test as a communicator – and failed.

"It seems that the internet has failed in its first truly hard test as a news disseminator. The best coverage is coming from the usual TV outlets," he said.

In the aftermath of the disaster, the sheer demand for information sent news site after news site crashing down, especially in the US, leaving the world once more glued to the telly for the up-to-the-minute details of what was taking place.

The Register did its best. Generally, the site stayed up, and in response to email requests from Americans who were stuck at work, Reg hacks posted rolling updates, sourced from TV and radio, as the disaster unfolded.

Ten years on, things have changed. For starters, internet infrastructure is much more robust. In 2011, the internet still hasn't beaten TV for serving up breaking news, but it's at least an equal player now, with news organizations trawling Twitter, Facebook, YouTube, and personal blogs to find out what is happening on the ground.

In many ways, 9/11 itself has changed the net – and it has changed so many other things here on the Reg beat. Much will be written over the tenth anniversary of the 9/11 attacks about the human tragedy of both the event and the War on Terror that followed, about the reactions and over-reactions of governments around the world. It was an event that changed history. But it changed technology, as well.

After 9/11, the FBI set up a website to get information, appealing for anything anyone knew about the terrorist attacks, and ordinary people were setting up websites that let survivors tell their friends they were alright.

While vigilante hackers were ineptly attempting revenge, and conspiracy theorists and alarmists were using the web to spread panic, Manhattanites turned to email to let people know they were okay when New York phone networks buckled.

The internet had certainly failed at getting the news out as it happened, but where it triumphed was as a communicator of all the good – and the bad – human reaction to the tragedy.

While the internet was regaining its feet, much bigger and more long-lasting effects from the attacks were fomenting in governments.

US president George W Bush went to war. Combat in Iraq and Afghanistan and the billions that poured into the US defense budget didn't just topple governments and shatter nations, these things spawned new technologies by the score.

Attack of the drones

Within a year of the Towers' fall, the first of the killer drones was in action as the CIA fired a Hellfire missile from a Predator drone above Yemen in 2002 to kill al-Qaeda bigwig Qa'ed Sunyan al-Harethi - after remotely programming his cellphone to switch on without his knowledge so that he could be targeted.

Thousands of people have been slain by robotic aircraft since then, and the original Predator has been joined by dozens of competing designs. The flow of military and security cash triggered by 9/11 has also given birth to such things as the Judge Dredd smart-rifle, able to shoot around corners, a backpack microwave ray gun, and so much more. Some of these things would have appeared anyway, but it's certainly true to say that without 9/11 there would have been fewer of them and Reg coverage of the past ten years would have had a very different flavour.

The War on Terror had other side effects as well. Soldiers returning home with missing limbs led to renewed investment in prosthetics – with some truly awesome results.

It wasn't just the US Department of Defense that changed the shape of the tech world after 9/11. The fall of the towers also called into being the colossal Department of Homeland Security, and again enormous budgets were soon being spent.

The DHS has always had its eye on the cutting edge of technology – so close to the edge, in fact, that it occasionally fell over it, such as when pumping money into schemes like the handheld lobster scan guns and mind probes.

It also has had controversial ideas, like full body scanners that show would-be airline passengers in the nip.

But some ideas have been more defensible, such as its keen interest in cybersecurity, something that hadn't been a big feature of government security budgets before. In fact, the ability of terrorists to use the internet to communicate focused attention on the web in a new way, and as a side effect awakened the authorities to the realities of cybercrime - much though some might argue that the "cyber warfare" hype of recent times has had an ignoble smell of pork about it at times.

But whatever the last ten years have brought, the anniversary will most often throw us all back to where we were that day, how it made us feel, and the horrific reality of a hole in the ground where the World Trade Center's twin towers once stood.

The wreckage of Ground Zero, as everyone knows, became a powerful symbol for Americans (and for others; many echoed French president Jacques Chirac after the attacks, when he said: "Today, we are all Americans"). It's well known that steel from the shattered towers was used in the construction of a new warship, the USS New York.

It's perhaps less well known that aluminum salvaged from Ground Zero was used in the construction of the NASA Mars rovers Spirit and Opportunity - old friends to all regular Reg readers - and even today is helping with exploration of the red planet.

So 9/11 changed things for us here at The Register, if only in a small way compared to so many others. We too can look back today and say that our world would have been very different if it hadn't happened. ®