Cambridge-based PragmatIC has produced an NFC-enabled label with a built-in screen picking up power from the device reading the tag, surely worth £600,000 of anyone's money.

The technology involves printing a tag with an embedded Near Field Communications transponder, but one that also incorporates a small screen powered by the same induced current used to run the transponder. The screen can only display one image, and only for a few seconds, but is thinner than a human hair and really cheap. 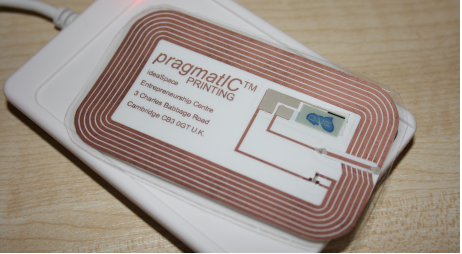 The screen is top right, and stays active for 2-3 seconds following a read

We mention the development cost of £600,000 as half the cash came from the UK Government's Technology Strategy Board, which feeds money from the Department of Business, Innovation and Skills into the UK technology industry.

In this case the development was done by Cambridge-based PragmatIC and Hampshire's DeLaRue – the latter being a big name in the secure-printing industry (found on chequebooks, credit cards and the like).

NFC tags draw power from the device being used to read them (be that an NFC phone or other reader). That power can be used to transmit an identity number or complete some sort of cryptographically secured challenge/response process, depending on the level of security required. The Remotely Activated Interactive Labels (RAIL) developed by PragmatIC uses that same power to light up the screen, which fades a few seconds after the power is removed.

It is possible to imagine a tag hanging on a piece of clothing that displays a logo only when the tag is read to prove that it's genuine, and DeLaRue reckons this is comparable to the hologram that adorns credit cards to make them harder to copy. But we can't help feeling that once you're reading the NFC tag then the cryptographic challenge should weed out counterfeits a lot more effectively than a monochrome logo.

So it is a cool technology: an induction-powered screen which can be printed using conventional hot lamination processes and embedded in just about anything, now the companies involved just have to find something interesting in which to embed it. ®