zEnterprise bump to turn into a grind

There are only about 4,000 IBM mainframe shops in the world, but they sure do spend a lot of money. And according to a new survey, they are going to keep on spending it for the foreseeable future.

IBM is not the only player with skin in the System z game. BMC Software, which sells provisioning, monitoring, and management software for mainframes and other server platforms, gets a fair chunk of its $2.1bn in annual sales from the System z racket. And for the past six years, it has been surveying the mainframe base to get a sense of what they are concerned about.

In its sixth annual mainframe survey, BMC talked to 1,347 mainframe shops, with 61 per cent of them being BMC customers and 39 per cent not. It's fair to say that this was likely quite representative of the IBM mainframe base – not the kind of sample you normally see in IT surveys.

The data was a bit skewed toward larger companies, with more than half having $1bn or more in annual revenues. The data was also a little heavy on the Americas, which supplied two-thirds of the respondents; 24 per cent came from Europe, and 9 per cent came from Asia/Pacific. Government agencies and financial and insurance companies represented the biggest industry sectors.

In this year's survey, there are fewer respondents than last year, but they have the virtue of being more optimistic about the prospects for the System z machinery: 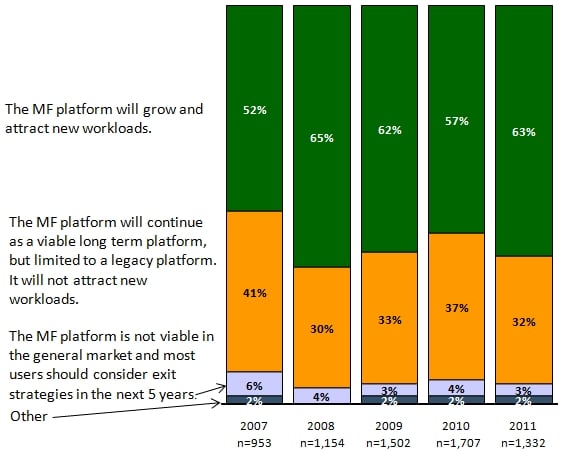 As you can see, the Great Recession made mainframe shops a bit more pessimistic, but the new zEnterprise machines and more aggressive pricing – particularly with the specialty engines that act as coprocessors for DB2 (zIIP engines ) or Java and XML (zAAP engines), or run Linux (Integrated Facility for Linux or IFL engines) – have helped keep the mainframe business chugging along.

In the survey, 63 per cent of respondents say the mainframe will attract new workloads and grow at their companies, while another 32 per cent said they believed it would be viable, but only for existing legacy workloads. About 3 per cent of those surveyed said users should consider their mainframe exit strategies over the next five years, and 2 per cent merely replied "other" – as if there were another option.

So what is driving the growth in mainframe MIPS capacity? The biggest factor, cited by 67 per cent of respondents, was higher transaction volumes on existing applications; 65 per cent said that their businesses were growing, and hence requiring fatter mainframes.

Just under a third of the respondents said that new workloads coming to the mainframe were driving MIPS growth, down a few points from last year. Of those that are growing their MIPS capacity on IBM mainframes, the security of the mainframe platform, its high reliability and availability, and database scalability and transaction throughput were not only cited as key factors for increasing investments in mainframes, but these factors have increased – slightly – in importance over the past four years.

This year's BMC mainframe survey shows IFL and zIIP engines being deployed a bit more enthusiastically by mainframe shops, but the zAAPs fell a bit compared to 2010's survey – not by very much, mind, you, with only a 1 per cent difference.

The zEnterprise mainframe upgrade cycle has been boosting Big Blue's financial results for the past three quarters, but it may be poised to lose some steam in the next quarter or two. According the the BMC survey, 28 per cent of those shops polled have no interest in moving to a new zEnterprise mainframe, while another 47 per cent say they have already installed a zEnterprise machine.

Only about a third of those customers who have a zEnterprise machine installed or in the works say they are interested in the z/BX integrated blade server bolt-on for mainframes, which allows for Power blades running AIX and x64 blades running Linux or Windows to be put under control of the mainframe systems software and linked to the mainframe through an isolated, internal network. ®