Preview Microsoft is facing up to the million-dollar question: how does it compete with Apple's iPad and Google's Android when Windows was designed for keyboard and mouse rather than touch control?

Microsoft's answer has been to create a platform based on Metro, the design style in Windows Phone 7. Metro apps run full-screen without any surrounding chrome, which is why Microsoft calls it an immersive user interface. Microsoft has used the opening of its BUILD conference in Anaheim, California, today to deliver the first developer preview of Windows 8, the first version of Windows optimised for touch.

For all the tablet focus, users expect a Windows PC to run Windows applications, so Windows 8 also supports the traditional Windows desktop. In the current build, Windows 8 looks much like Windows 7, aside from the disappearance of the old Start menu in favour of pages full of Metro tiles. 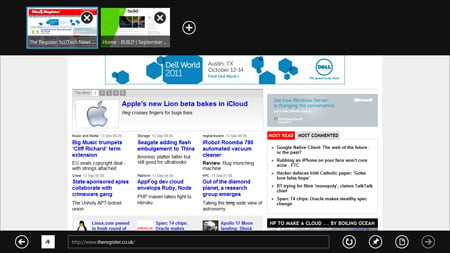 IE goes Metro: new menus top and bottom vanish when you tap the page, for a full-screen view

The Metro UI is not just an alternate shell. Metro is built on a new native code, Windows Runtime (WinRT), which can be called from two alternative view engines. The first is XAML, the layout language used by Microsoft's Silverlight media player and Windows Presentation Foundation (WPF), driven by code written in C, C++, C# or Visual Basic. The second is HTML and CSS, driven by code written in Javascript. Microsoft notes that the Metro Software Development Kit (SDK) "also includes a subset of traditional Win32, COM and .NET Framework APIs".

Microsoft has promised to clarify the Windows developer story at BUILD. So far, it looks like this: Metro is a new platform, and while you will be able to port code from existing Windows applications, they will need to be rewritten. XAML and .NET are supported, but this is not Silverlight or WPF – though the Silverlight plug-in still runs in the browser. Microsoft does seem to be promoting the HTML and Javascript approach here at BUILD, but says XAML and .NET have access to all the same features. 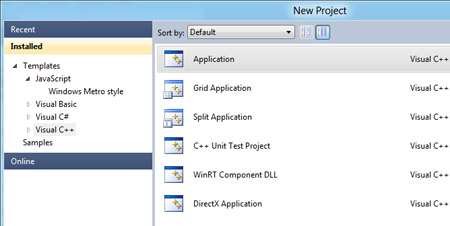 Windows Phone remains a separate platform. Windows group president Steven Sinofsky told the press ahead of BUILD that the different form factor means that running the same app on phone and tablet is not an immediate prospect. That is missing the point though; in principle Windows Phone could have its own cut-down version of WinRT, but instead it has Silverlight and XNA. It seems that Windows developers will have to live with this diversity for some time.

I was given a Windows 8 Intel-based tablet by Microsoft to try, just ahead of its public unveiling at BUILD. Windows 8 will also run on ARM, but Microsoft says the ARM build is not yet ready to show. Once set up, it boots from cold in around 10 seconds – impressive. Resume from sleep is near-instant.

Windows 8 opens to a lock screen. Password entered, you see the new Start menu, formed by Windows Phone-style live tiles in a horizontally scrolling view. Tap a tile to launch an app, which presuming it is Metro-style will open full-screen. Application menus are accessed by a quick swipe top or bottom, letting you access, for example, open tabs in Internet Explorer.