Brings back the Pentium

IDF 2011 Micro servers – those tiny machines suitable for dedicated hosting and Web infrastructure workloads – are not exactly taking the market by storm, but they are carving out a niche for themselves.

At the Intel Developer Forum in San Francisco today, Naveen Bohra, a product marketing engineer at the chip maker, trotted out essentially the same presentation that the company put out back in March when it formally embraced this sector of the market. Bohra went over the company line that over the next four or five years, Intel believes that micro servers could eventually account for as much as 10 per cent of the total addressable market for x64 servers, which is a pretty decent slice of the server racket.

Bohra brought along some peers from Dell and SeaMicro, the former talking about the PowerEdge C5220 micro servers based on Intel's "Sandy Bridge-HT" Xeon E3-1200 processors and the latter talking about the SM10000-64HD, which is a system that is essentially a supercomputer cluster of 384 dual-core Atom N570 processors. None of this was news to El Reg readers.

What was revealed at IDF was an updated roadmap for micro server processors from Intel, seen below: 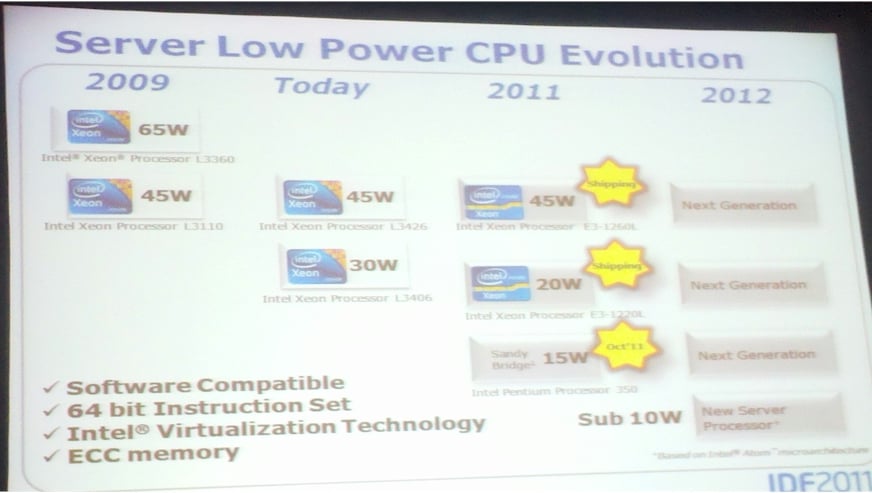 Back in March, Intel said it would have a 15 watt "Sandy Bridge" part for micro servers some time in the second half of 2011, and in the updated roadmap above (which is admittedly hard to read from the photo), we learn that this chip is actually coming out in October and will be called, of all things, the Pentium Processor 350. (You would think Intel would go with the Xeon E1 or something.) According to Bohra, this part will only be available for micro servers and will not be available for desktop systems. He did not elaborate any further on the feeds and speeds of the chips.

Bohra also reiterated that Intel is working on a lineup of future Atom processors that will have a thermal design point of under 10 watts and will support VT hardware-assisted virtualization electronics, 64-bit addressing, and sport ECC error correction on main memory – all features needed by servers. Further details on these Atom processors, which are due in 2012, were not available. ®