LOHAN to suck mighty thruster as it goes off, in a shed

Our piece earlier this week on possible power plants for our Low Orbit Helium Assisted Navigator (LOHAN) rocket-powered spaceplane got you lot thinking about how one would go about testing a rocket motor which needs to fire at altitude and -60°C.

To recap, experts gathered at International Rocket Week advised us to go for an off-the-shelf solid rocket motor – such as the AeroTech RC 32/60-100NS – that is specifically designed for rocket-powered gliders.

However, when we asked AeroTech about the motor's potential performance under LOHAN conditions, president Gary Rosenfield said he didn't know "if the motor will ignite reliably at that altitude without a burst plug or other means to retain internal pressure".

Well, there's only one way to find out: the hypobaric chamber. Sadly, but very wisely, boffins such as those down at QinetiQ – where we tested our Paper Aircraft Released Into Space mechanical release mechanism – don't allow blokes to fire up rocket motors in their expensive installations.

So, the only solution is to get into the shed and build our own test rig. You lot appear to be on good form at the moment, and we duly took on board your hypobaric suggestions in coming up with this cunning initial design: 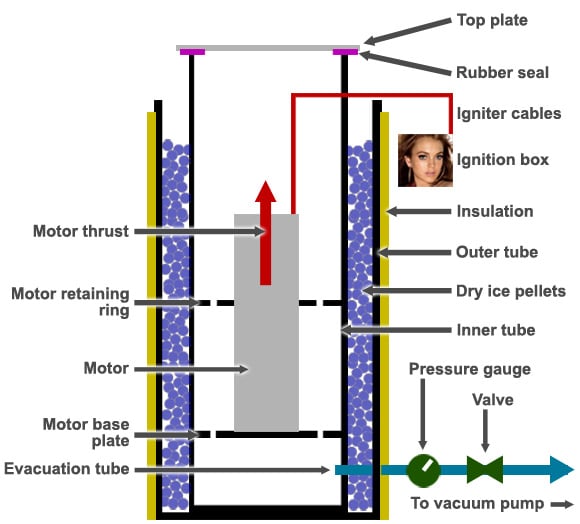 What we have here is two concentric metal tubes, with the space between them filled with dry ice pellets to bring the internal temperature down to the required -60°C. External insulation helps keep the whole thing nice and chilled.

The rocket motor is mounted nozzle-up inside the inner tube, and held in place by a base plate and retaining ring (both perforated, to allow free evacuation of air). The tube is sealed at the top by a circular plate sitting on a fat rubber seal. The theory is that as the air is sucked out of the tube, the top plate is pulled down against the rubber seal.

Of course, since the plate isn't otherwise attached to the tube, it will be ejected if the internal pressure rises critically when the motor fires. That way, we have a "safety valve" to prevent the whole thing exploding.

It doesn't really matter if the rig does blow its lid, as we're only testing the motor's ability to fire, not its performance across the entire burn.

Throw in a vacuum pump, pressure gauge and valve assembly to control the evacuation of the inner chamber, plus connections for the motor igniter, and away we go. What could possibly go wrong?

Our first thoughts on materials: steel for the outer tube, aluminium for the inner, and copper tubing for the evacuation piping. After knocking together the graphic, we realised an internal temperature sensor would be a useful addition to the rig.

As always, your thoughts and suggestions will be welcomed with open arms, and on that matter, just what are we going to call this LOHAN vacuum beast?

Rather disappointingly, we at the Special Projects Bureau failed dismally to come up with the traditional celebutard backronym. The best we could do was HERMES (Hypobaric Experimental Rocket Motor Evaluation System). Feel free to offer alternatives ... ®