So how does it work with an iPad? After a bit of tinkering, very well, as it happens, but as the small print says, you need the Apple iPad Camera Connection Kit. This accessory will set you back £25 and includes the iOS-dock-to-USB adapter that you use to plug in the Keystation Mini 32. 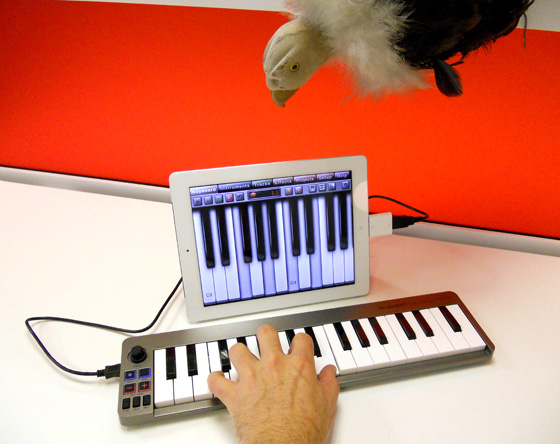 And your bird can sing...

I tried it on a bunch of apps and nothing worked. Then I quit all the apps on my iPad 2, unplugged/replugged the keyboard and started again, kicking off with Xewton’s Music Studio 1.6.1. Apart from being an impressive sequencer, this also reveals the status of the MIDI configuration, which boosts confidence. Incidentally, running a MIDI controller with iOS devices or through the camera connector isn't unique to this product, but it is a neat combination.

Tests with Apple's GarageBand followed, which was all well and good, but unlike Music Studio, the virtual keys didn’t move when playing from the Keystation Mini 32, even though you could hear every note. It’s not a big deal, but when it comes to hooking up with external controllers, the Xewton app seems more refined than Apple’s offering. Incidentally, I did try it with an iPhone 3G, but attaching the camera kit prompted a message that it isn't supported and the keyboard didn't power up either.

Educational goal: the Sibelius software will score points with music students – the hardware anyone can play with

The M-Audio Keystation 32 Mini has appeal for quite a diverse range of players. With its Sibelius First software it offers an educational tool as well as scoring functions for more traditional arrangers/composers. Those not versed in music theory can use it alongside more contemporary music applications on a laptop, desktop or iPad – although they might want to consider splashing out a bit extra for a larger keyboard with additional controllers.

Still, it is a very handy size, but the main catch for iPad users is that the camera kit adapter is almost half the price of this keyboard. Yet try it and you’ll be hooked, as makes a huge difference when knocking out fondleslab fugues. ®