The first Air had strange proportions, reminding me of the “toilet seat” iBook. The current design, introduced last year, is much more balanced, and an instant classic. It’s quite beautiful, barely thicker than the USB port, and the perfect size and weight for mobile work. The 11in Air is light enough to pick up with three fingers, and most bags will be heavier than the machine itself. Indeed, if it were any smaller, the keyboard would be compromised.

Lighter than most laptop holdalls

As with all mini-notebooks – and all netbooks – you are left with the strange feeling of peering through a slot after an extended time. Still, the 11in screen does offer a pin-sharp 1366 x 768 resolution – a high density 135ppi versus 128ppi on the larger sibling. That may be enough to oblige you to increase the default font and icon sizes – these have crept up in Mac OS X 10.7 a little.

Indeed, this is why Apple introduced a compositor display model a decade ago, and why Microsoft had to follow suit with Vista. It wasn’t for the eye candy, that's a bonus, but because of ever-higher density displays. Such displays actually bring us back to the information density Mac users enjoyed a decade ago, before Mac OS X.

Under typical usage, the machine checked in at around four hours on its new 4725mAh battery. Adobe Flash isn’t installed by default, yet once it was, this duration became nearer three than four hours. Incidentally, Java isn’t included in 10.7 Lion either. Reg Hardware's continually run PCMark Vantage (under Boot Camp) until it dies test, clocked up a battery life of 1hr 44mins. Naturally, the charge capacity will deteriorate over time, and then, with there being no faff-free battery swap, you’re a bit buggered.

At no point in normal usage did I hear the internal fan rev into life even though, according to iStat Pro, it has one churning away at around 2,000RPM most of the time, yet this is a machine designed to be silent. During normal usage the base remained fairly cool, with some warming near the rear of the machine’s underside. Even when playing three HD videos – in a warm office with the aircon off – the machine remained silent, and the warmth spread to around half of the base, without getting particularly uncomfortable. 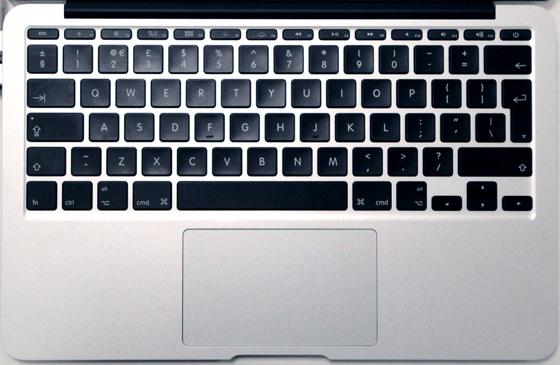 Any smaller and the keyboard spacing would suffer

By contrast, the heat generated by my Core Duo MacBook at peak loads can be felt through my desk. So this is a significant improvement on older Mac laptops, particularly with the notorious Flash in play. Yet, on the Macbook Air, there are no visible grilles or vents. This is quite a feat.