Astronomers using the Keck Observatory in Hawaii have captured the aftermath of an object slamming into Jupiter - material thrown up into the atmosphere by the impact and posing for the camera in the infrared: 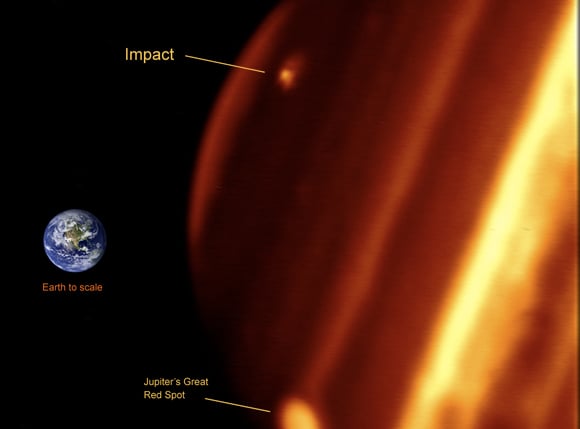 The event was spotted by amateur OZ astronomer Anthony Wesley in Murrumbateman at around 13:30 GMT on Sunday, New Scientist explains. He spread word of his discovery via email, and US scientists - including Paul Kalas of the University of California Berkeley, Michael Fitzgerald of Lawrence Livermore National Lab and UCLA, and Glenn Orton of NASA's Jet Propulsion Lab - soon got wind of it.

They "happened to have observing time on the Keck II telescope" and were able to confirm Wesley's observation - the first such event seen since 20 pieces of comet Shoemaker-Levy 9 crashed into Jupiter 15 years ago.

Supporting evidence for the impact theory comes in the form of "a bright spot where the impact took place, meaning the impact warmed up the lower atmosphere in that area" and "hints of higher-than-normal amounts of ammonia in the upper atmosphere", something which was also thrown up by the Shoemaker-Levy comet event.

As to what exactly might have crashed into Jupiter, Orton admitted to New Scientist he didn't have a clue, although he suggested it could have been "a block of ice from somewhere in Jupiter's neighborhood, or a wandering comet that was too faint for astronomers to detect before the impact". ®